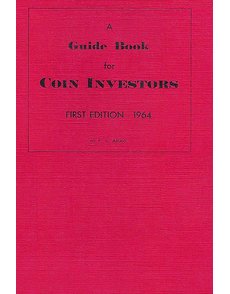 My past three columns have been about the Guide Book of United States Coins. This final column in the series focuses on the Red Book’s kissing cousins: volumes deliberately designed to evoke the iconic golden-lettered red covers. Some were approved by Whitman Publishing, some not, but all are collectible literature.

The design of the Guide Book itself had an inspiration, but Whitman’s records do not pinpoint a source. A strong candidate is The Little Red Book of Major League Baseball, an annual series published by the Al Munro Elias Baseball Bureau starting in 1925.

Wayte Raymond’s Standard Catalogue of United States Coins, an annual series of reference books begun in 1934, employed covers of varying colors, but for 1947, the cover was red. Despite the Standard Catalogue’s head start and generally high quality, it was out-competed by the Guide Book, and Raymond’s publication went extinct after 1957. Whatever the inspiration for its design, the Red Book became a successful franchise, thus tempting competitors to poach on Whitman’s brand.

An early interloper was A Guide Book for Coin Investors, by F. S. Arko. It resembled Whitman’s baby, but it was not as reliable, touting the investment potential of Uncirculated Lincoln Memorial cents from 1959 to 1963.

Today, if you Google “Guide Book+coins,” one of the images that results is the cover of The U.S. Coin Digest. This volume directly competes with the Guide Book, and its covers are — unsurprisingly — Red Book red.

Some of the borrowings came with Whitman’s blessings. On May 14, 1977, at the banquet of the Central States Numismatic Society, the guest of honor was R.S. Yeoman. Each attendee received an eight-page booklet titled — again, unsurprisingly — “Mr. Red Book,” the cover of which perfectly reproduced the 1978 edition.

WGY offered this series, mimicking the classic red cover, at a relatively high price, resulting in few sales. It is therefore a rarity today.

Whitman got in on the act, issuing a number of “brand extensions.” At the ANA convention in 1996, Whitman saluted the 40th anniversary of its prize franchise by creating a tiny coin album in the form of a miniature first edition, with openings for 1946 and 1996 dimes. And, in 2006, Whitman celebrated the 50th anniversary by issuing a facsimile first edition.

So iconic has the Guide Book become that these knockoffs and facsimiles have all become prized collectibles. In David Sklow’s eighth numismatic literature sale (2009), a copy of “Mr. Red Book” sold for $127, and the WGY volumes for $163. R.S. Yeoman would have been surprised — and proud — of literature collectors’ devotion to his brainchild.