Found In Rolls: A parrot, kitty and bear, oh my! 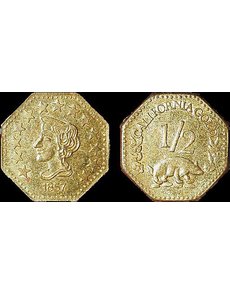 The bear design on the back of this fantasy piece is the giveaway that it was made to mimic a California small-denomination gold privately issued coin. The fantasy piece was found in a roll of dimes.

I can’t believe that I’m acknowledging this but the fact is that I have become addicted to my daily excursion to my local “Big-Mart” store.

I guess that as I approach senior-citizenship, getting out to see the world at least once each day has become a really big deal!

Anyway, on a recent expedition to round up some parrot food and kitty litter, I filled my cart and proceeded to wait in line so that I could ultimately pay for my stuff and go home. Arriving at the register, I swiped my ATM card and punched in my PIN code.

At that point, the computerized system offered me the option to get some cash back and as I sometimes do, I responded in the affirmative by touching the $20 icon on the small screen.

As my purchase was approved, the drawer of the register sprung open and I spied four rolls of dimes that had been piled into one of the cash drawer compartments.

According to the cashier, the dimes had been used by an earlier customer to make a purchase. Being a roll searching opportunist, I just couldn’t help myself so I asked for the four rolls of dimes instead of the $20 bill that was offered to me by the cashier. I’m glad that I did!

While the illustrated California small-denomination gold piece is not genuine, it was still something that I did not expect to find in the midst of a roll of normal U.S. dimes.

The octagonal piece is about 7/16ths of an inch across. One side of the piece is dated 1857.

In addition it exhibits a crudely rendered bust supposedly of Liberty surrounded by 13 stars and a beaded border. Unfortunately, the portrait looks like the Wicked Witch of the West as played by Margaret Hamilton in the 1939 movie The Wizard of Oz.

The design on the other side confirms the piece is a fantasy. The design is depicts a bear below the denomination expressed as a fraction with the inscription CALIFORNIA GOLD appearing above.

Genuine examples of these privately produced pieces were issued beginning in 1852 in quarter dollar, half dollar and dollar denominations.

No genuine pieces ever used a depiction of a bear on the reverse, though that design element is seen on many modern small-denomination gold replicas.

The Coinage Act of April 22, 1864, made private coinage illegal but the law was not fully enforced until 1883.