Making Moderns: Series offers something for all 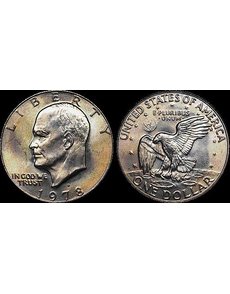 Eisenhower dollars struck in 1977 and 1978 are more available in higher grades than earlier copper-nickel clad issues, as this superb Uncirculated 1978-D example of the coin illustrates.

Circulation-strike Eisenhower dollars — or Ike dollars as they are universally called — are modern coins with one foot in the past.

They are the first copper-nickel clad dollar coin, but they retain the large diameter of their silver dollar predecessors. And, Ike dollars made for circulation were notoriously mishandled and are all but nonexistent in superb gem Uncirculated condition. This last feature aligns collecting of Eisenhower dollars closely with classic coins that are elusive in high grade.

They are the only modern U.S. copper-nickel coin that routinely achieves these values.

Produced from just 1971 to 1978, the Ike dollars offer surprising diversity. Advanced collectors seeking to build a complete set of Mint State coins usually purchase 23 pieces. This set comprises all copper-nickel coins struck at both the Philadelphia and Denver Mints, plus a handful of major subtypes, and five coins struck for collectors in 40 percent silver at the San Francisco Assay Office from 1971 through 1976.

While no coins are dated 1975, the Bicentennial copper-nickel clad issue has two subtypes: The Bold Letters or Type I design has wide, flat letters on the reverse; the Thin Letters or Type II has thin letters with serifs. They are easily distinguishable.

Additionally, most collectors purchase all three subtypes of the 1972 issue. These variants are characterized by subtle modifications to the reverse design, most evident in the arrangement of islands on the Earth rising behind the eagle. The 1972 Type II, with its indistinct islands off the coast of Florida, is the key to the series. Attributed to just two die pairs, only an estimated 250,000 or so were struck. They were poorly produced and indiscriminately handled. Just five have been certified as MS-66 with none better, and these are valued in excess of $10,000!

The 40 percent silver issues are another link to the past and were the lone U.S. Mint silver coins produced in the mid-1970s. Struck at the San Francisco Assay Office, the Uncirculated versions were sold directly to collectors in blue envelopes, and often these are referred to as “Blue Ikes.” They can be wonderful and attractive representatives of the design, and fortunately all but the 1971-S Eisenhower dollar can be found in MS-67+; the 1971-S dollar remains appreciably tougher to find in high grade.

One adjunct to the 23-piece set now sought by collectors is the 1971-D “Friendly Eagle” variety. It is believed that the first 500,000 or so examples struck at the Denver Mint were made from reverse dies with a slightly modified design, showing the eagle without a brow line. This variety has been gaining in popularity; in fact, Numismatic Guaranty Corp. just started recognizing it in 2013 in response to collector demand.

One great feature of this 23- or 24-coin set is that it can be assembled in mid-range Uncirculated grades by the more budget-minded collector. While the set could easily cost upwards of $35,000 in MS-66 grade, a set grading MS-64 could be assembled for less than $1,000.