I do not know for whom full bell lines toll, just not for me 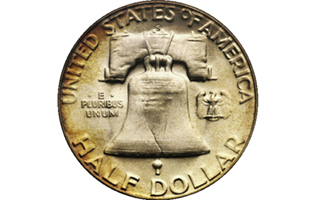 In a column that recently appeared in Coin World, Q. David Bowers discussed the “full bell lines” designation relative to the value of Franklin half dollars. At a coin show that I attended shortly thereafter, I came across a dealer with a large assortment of slabbed Franklin halves, many with full bell line designations and a seemingly equal number without.

Franklin half dollars have always been one of my favorite coins, and a full set is affordable, but I really had not thought much about the full bell line designation until I observed the activity around the dealer’s table. Many customers were asking to see coins with full bell lines, which, in my opinion, seemed to overshadow other positive attributes of each coin.

Winged Liberty Head (or Mercury) dimes have a full split band designation, Standing Liberty quarter dollars have or do not have a full head, while Jefferson 5-cent coins either have or do not have full steps on the coin’s reverse. It occurred to me that along with Franklin half dollar’s full bell lines, the designations for the other mentioned coins were strictly related to one aspect of grading: strike.

When I look at a coin for the purpose of grading it (so I can determine if the price is something I am willing to pay), I look for a strong strike, but there are other factors that I consider. Luster, contact marks, overall eye appeal, which includes toning, in addition to strike, are all factors that influence my decision. In my opinion, focusing on strike seems to minimize other factors involved.

Personally, I rely more on eye appeal than the other components of grading. A coin has to look good to me before I get interested enough to consider buying it. Sometimes coins look better than the stated grade on the holder, and sometimes they look to be overgraded. If a coin has eye appeal that looks good, I next examine the luster.

This can be tricky because certain dates and Mint marks were poorly struck to begin with, so finding a coin with blazing luster is much more difficult for some dates. An evenly toned coin with above average luster will always attract my attention, provided the contact marks on the coin are minimal and not severe on the major devices. I have seen many Morgan and Peace dollars that are beautiful coins except for a large scratch or mark on a key field on the obverse of the coin. Less obvious contact marks are easier for me to tolerate, especially if some natural toning appears on the coin.

As I stood at this coin show, all of these preferences came to me. Eye appeal is the first characteristic that I look for in a coin, followed by luster, and then contact marks. Strike came in last on my list, which was a bit of a revelation to me. Even though my time in the hobby spans nearly five decades, I had never taken the time to prioritize exactly what was important to me when buying a coin, other than above average eye appeal.

Interestingly, I know of no way to quantify eye appeal or luster, although one Coin World advertiser uses an eye appeal scale. Still, this is an opinion and the grading services do not assign a designation of “great eye appeal” or “outstanding luster.” These two factors are completely subjective in nature. Contact marks are visible, but once again, are not quantified. The final grade assigned takes the number of marks into consideration, but the holder does not reference contact marks.

Only striking features (full bell lines, full steps, full heads, full split bands) are noted and quantifiable. All other characteristics taken into consideration when grading a coin are subject to the opinion of the grader based on accepted characteristics. Perhaps having a measurable and defined characteristic is the allure of full strike designations to some collectors.

Out of curiosity, I decided to see how wide the price differential was between Mint State 65 graded Franklin half dollars and those graded MS-65 with full bell lines. In a recent issue of a periodical dedicated to numismatics, the total cost for all 35 MS-65 Franklin halves struck for circulation was $5,160, while the cost for MS-65 FBL coins was $36,170, although this figure is inflated by the $16,000 price tag of the usually poorly struck 1953-S half dollar. If this coin is eliminated, the price drops to $20,170. Thus, a collector can buy a complete set of MS-65 Franklin half dollars for approximately one fourth the price of the 34 least expensive MS-65 FBL coins. (For those of us who obsess over our collections, doing without a 1953-S Franklin half dollar with full bell lines would be difficult.)