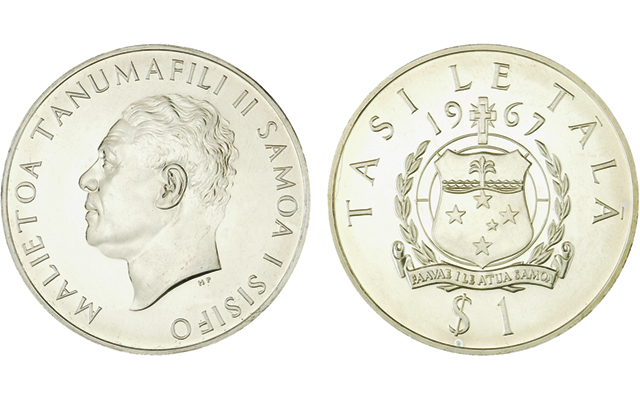 The edge lettering of Samoa’s first 1-tala coin is the sole reference to the July 10, 1967, introduction of decimal currency, which is not reflected on the obverse or reverse. Previously, New Zealand currency circulated there. 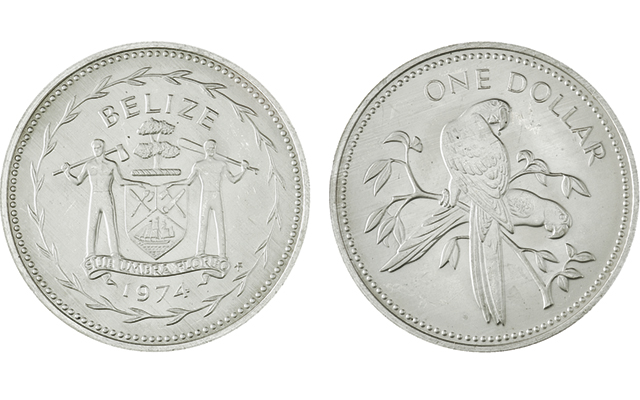 Belize, formerly British Honduras, issued coins in 1973, but the first dollar came out in 1974. This is the Matte copper-nickel version of the 1974 Scarlet Macaw dollar, made by the Franklin Mint. The mintage was only 6,656 pieces. 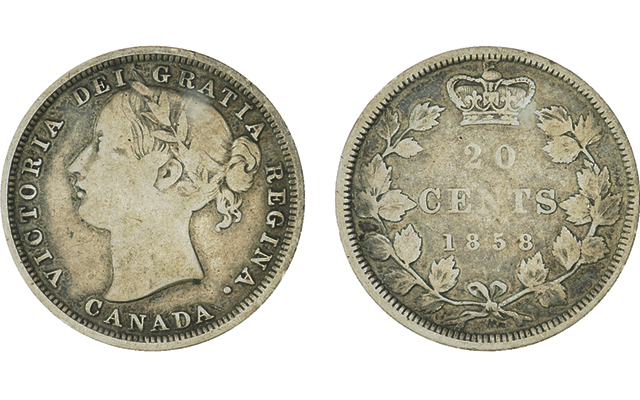 1858 was the first and only year that the Province of Canada minted a 20-cent coin. In the United States of America, the same denomination lasted only four years. 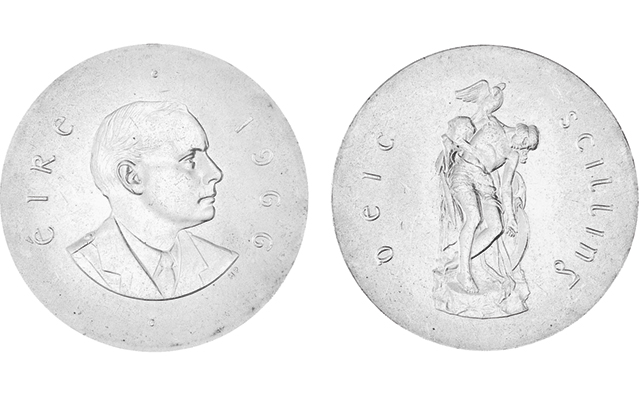 Known as the Golden Jubilee coin (marking the period from 1916 to 1966), this 10-shilling piece was Ireland’s first commemorative and first silver crown. It honored the brave people of the 1916 Easter Rising that led to independence. 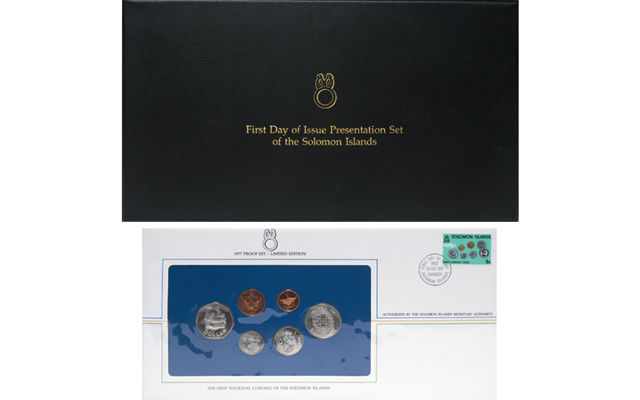 A “presentation set” of the first year of Proof coinage and bank notes from a newly independent Solomon Islands. In this image, the cover of the presentation folder is paired with the sleeve holding the coins. 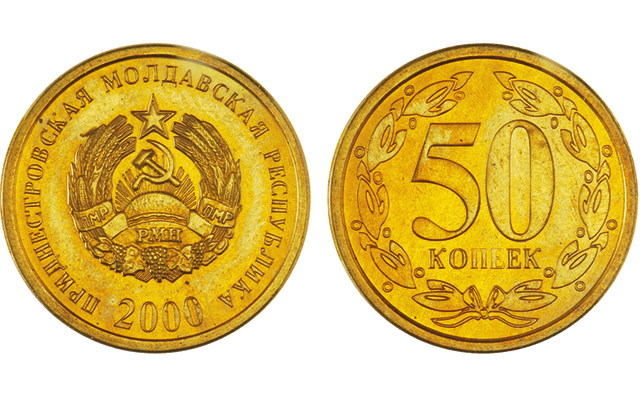 Not recognized internationally yet but listed in the Standard Catalog of World Coins, Transnistria, Nagorno-Karabakh, Abkhazia, and South Ossetia are all post-Soviet “frozen conflict” zones or unrecognized states. Depicted above is the first 50-kopek coin of Transnistria, dated 2000. 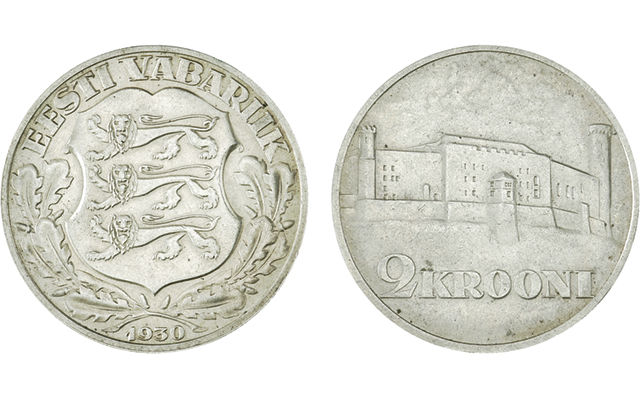 The 1930 2-kroon coin is the first silver crown of Estonia, a nation that has been conquered by many different nations but regained independence in 1991. A smaller silver 1-kroon coin was issued in 1933. 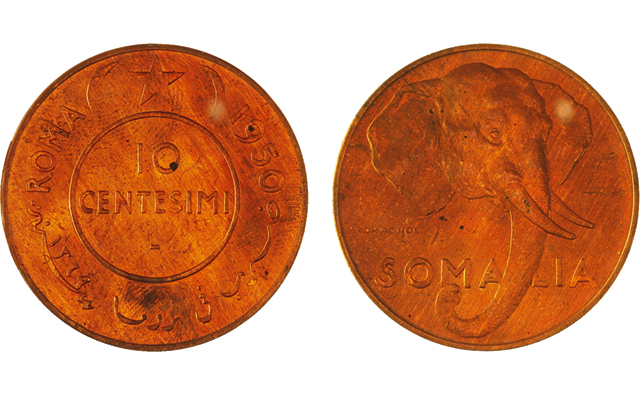 The largest of Somalia’s popular first-year and one-year-only trio of Elephant Head coins, this is the 10-centesimo piece. Technically, Somalia became a UN trusteeship under Italy in 1950 but its independence was assured and became official in 1960.

Stamp collectors call them “Number ones,” the first stamp ever issued by any given nation.

This is a fascinating way to collect world coins, too. And this specialty lends itself well to different budgets.

While the first coin type ever minted by a centuries-old country could be very expensive, the firsts of newer nations are typically low cost. These collections can be expanded by pursuing different types of number ones within the same nation, such as the first Mint set or commemorative.

New nations are born nearly each year as boundaries or names change, or both. Our planet’s political climate is so dynamic, this is the type of collection that by definition can never be completed. This specialty is all about the journey, not the destination.

One of Canada’s firsts that is not difficult to find is its first 20-cent coin. In 1858, the first and only 20-cent coin that Canada would ever produce was made in silver with the bust of Queen Victoria on the obverse. Newfoundland and New Brunswick issued this denomination longer than the Province of Canada; however, the 20-cent coin was a short-lived experiment overall.

Samoa made it simple for first-coin collectors in 1967 after achieving independence from New Zealand when its 1-tala coins were issued with cards that read: “Specimen coin, First Minting of Western Samoa’s own coins.” Edge lettering on the coin reflects the date that it was introduced.

Today, U.S. dollars circulate freely alongside the tala coins, especially since the territory of American Samoa is next door.

Former British colonies are a rich source of first-type coins because many are now independent.

British Honduras became Belize in 1973 and issued its first coins that year. The first dollar coins came in 1974. Great Britain formally granted independence in 1981 so Belize has both an unofficial and an official year of independence. Perhaps a true firsts representation should include at least one coin dated 1973 or 1974 and one from 1981.

Italian Somaliland minted its last coins in 1925, and officially, Somalia claims 1960 as its year of independence. However, this means the one-year-only 1950 Elephant Head coins in of 1-, 5-, and 10-centesimo denominations (issued while Italy administered Somalia as a United Nations trust) are the closest thing to its first coinage.

Ireland did not change the design of its coinage after the first year of 1928 until it switched to a decimal system in 1971. And during those four decades, only one commemorative coin, Ireland’s first and only 10-shilling coin, was issued.

The coin commemorates the 50th anniversary of the 1916 Easter Rising with a portrait of one of its independence heroes, Patrick Pearse. The reverse features a bronze Easter Rising monument. The hero Cuchulainn is strapped to a pillar so that he could stand and face his enemies until his death. Legend suggests that no one dared approach him until a raven on Cuchulainn’s head signaled his demise.

Not recognized internationally but listed in the Standard Catalog of World Coins by Chester Krause and Clifford Mishler, Transnistria, along with Nagorno-Karabakh, Abkhazia, and South Ossetia, are all post-Soviet “frozen conflict” zones or unrecognized states.

Transnistria’s lack of official status did not stop this Moldavian territory from creating its first bank notes in 1994 and coins in 2000. Perhaps these will one day be collected as Transnistria’s first pre-nationhood coinage alongside its first official issues.

Some places tend to be invaded and conquered over and over again. Estonia has that kind of history, having been a part of Denmark, Sweden, Germany, Russia, and Poland. Estonia was free from 1919 until 1941 when the Nazis invaded. The occupying forces of the USSR came next and finally independence returned in 1991.

Estonia’s first 2-kroon piece, a silver circulation coin, was issued in 1930 and its last in 1932. Its next silver coin would have to wait 60 years until 1992 and would be a commemorative 10-kroon piece.

The Solomon Islands became independent in 1977. To mark the occasion, the island nation near Australia issued a presentation set of its very first coinage and paper money. The 10-piece set with three bank notes and seven Proof coins was sold in a folder through the Franklin Mint.

The Solomon Islanders have struggled to build a nation amidst many catastrophes, but they remain an independent nation.