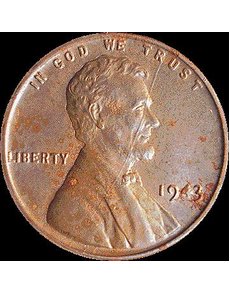 This 1943 Lincoln cent carries a long, thin, slightly sinuous ridge on its obverse face. It is most likely the impression of a filament that was trapped between the working hub and the blank working die. 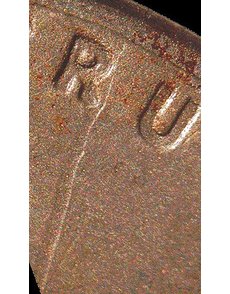 A close-up view of the northern end of the ridge as it passes through the R of TRUST. 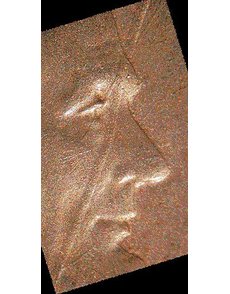 A close-up of the ridge as it crosses Lincoln’s face. 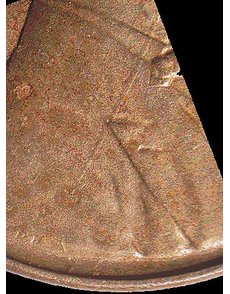 The ridge tapers and fades out before it reaches the base of Lincoln’s bust.

One category that is rarely encountered is a blemish that arises from debris trapped between a working hub and a working die during the hubbing process.

Each working die is fabricated through a process known as hubbing. A working hub, which carries a raised, normal-sized, normally oriented version of a coin’s design, is slowly forced under enormous pressure into a blank working die. The working die is left with an incuse (sunken), mirror-image version of the design. When the working die strikes a planchet, the normal raised design is formed on the newly struck coin.

The working die is annealed (heat-softened) prior to hubbing so that its surface metal can flow around the raised devices on the face of the much harder working hub.

The hubbing press is kept scrupulously clean, as even a small speck of foreign material that intrudes between the working hub and the working die will mar the latter. Yet, every once in a while foreign matter does find its way into this sanitary environment.

Robert Piazza recently sent me a 1943 Lincoln cent with a long, thin, slightly sinuous ridge on the obverse face. It appears to represent the impression of a filament, perhaps metal, perhaps nylon.

The ridge begins at the internal margin of the design rim and immediately passes through the right side of the R of TRUST. It then crosses the field and enters Lincoln’s bust. It passes through Lincoln’s face and neck before fading out near the bottom of his shoulder. Until this final fade-out, the ridge shows no change in its diameter or relief.

A few very faint, very thin, relatively short subsidiary ridges extend from the main ridge. These suggest that the filament responsible for the corresponding groove in the working die was frayed.

Piazza’s coin shows only slight hints of wear and carries only a few minor rust spots. The surface otherwise retains the original zinc coating of the galvanized steel planchets used for this one-year issue. This is important, as many steel cents were replated (“reprocessed”) with zinc in the post-war period for the collector market. It’s theoretically possible for debris to become trapped between the coin’s original surface and the secondary layer of zinc.

I suppose it’s also possible for debris to have clung to the steel cent strip before the original zinc coating was applied. However, any foreign matter trapped between zinc and steel at this point would have been driven into the planchet by the impact of the dies and would lie at the same level as the field and design.

The uniform clarity and dimensions of the ridge support the idea that this represents a piece of hubbed-in debris. A filament trapped between working hub and working die would be forced to conform to the newly-impressed recesses of the working die, producing a uniform incuse trace that wouldn’t skip any portion of the field or design.

Other causes of raised linear blemishes are less likely. Accidental gouges and dents in the working die face primarily or exclusively affect the field portion of the die. This is because the field is particularly vulnerable to damage while die recesses are relatively protected. In those rare cases where a gouge does extend into the design, it almost always appears on the coin with a reduction in height and width.

Die cracks are variable in their appearance but generally follow a straight path or assume a somewhat jagged trajectory. One thing a die crack will never do is follow a gently sinuous course like that seen in the 1943 cent.

Die defects are repetitive, appearing on every coin that the die strikes. Therefore, I fully expect some other 1943 Lincoln cents have this same ridge. If any Clearinghouse reader happens to stumble upon one, please let me know.

Before concluding, I should mention that superficially similar raised lines can be found on silver and copper coins, many dating from the 19th century. However, these lines represent acts of vandalism. Individuals would drag a sharp blade through the coin’s surface at a low angle, lifting up a narrow flap.” When the flap was pressed down, either intentionally or in the course of circulation, the incision would be hidden and all you’d have left is a sharply defined ridge.