How to spot rarities 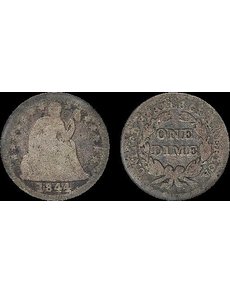 This 1844 Seated Liberty dime graded About Good 3 by ANACS sold for $69 at auction by Heritage Auctions in 2011.

Each month thousands of readers eagerly await the next issue of Coin World’s Coin Values. They want to look up the values of coins they own or ones they need for their collection.

Those values can also help educate hobbyists about little-known key and semi-key dates and other rarities that sometimes turn up at locations outside of a coin store or traditional coin auction.

Many of us know the keys, semi-keys and better dates of such popular series as the Indian Head cent, Lincoln cent, the Indian Head 5-cent, the Winged Liberty Head dime, the Washington quarter dollar, the Walking Liberty half dollar, and the Morgan and Peace dollars.

Suppose you spotted a short set of Seated Liberty, No Drapery dimes, all in About Good 3 condition, so worn you can barely make out the date, denomination and devices.

Collectors specializing in the series would have no trouble identifying 1844 and 1846 as rarities. They also likely would know how to distinguish the various errors, varieties and subtypes.

For example, they would realize that an 1840 Seated Liberty, No Drapery dime in AG-3 would be worth only $25, considerably less than the 1840 With Drapery subtype ($75 in the same grade).

Numismatic knowledge of this sort usually is earned after years of study. But the thrill of the “find” is common to nearly all collectors. Problem is, many of us may not know enough to spot a rarity in a lesser known series.

But you can find these kinds of coins in antique booths, flea markets and estate auctions because their owners usually do not know the values, either. (You can inform them of course, when you negotiate a fair price.)

How can you know? You can create a “Sleeper Sheet.” “Sleeper” here doesn’t refer to the coin, but to the collector who hasn’t yet realized the allure of less popular denominations such as the silver and copper-nickel 3-cent series.

To make your sheet, record all coins worth more than $50 in About Good 3 or Good 4. And be sure to exclude:

? All Proofs. You seldom find Proof rarities in antique booths and other non-numismatic venues.

? Colonial and older series, such as Liberty Cap and Draped Bust cents.

Again, these are so rare you hardly ever encounter them in common places.

Even with these exclusions you’ll still end up with hundreds of coins for your very own Sleeper Sheet.