Found In Rolls: An adventure for a few dollars 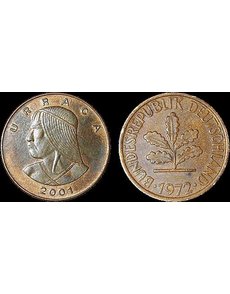 Both the 2001 Panama 1-centesimo de Balboa coin, at upper left, and the 1972 5-pfennig piece from the Federal Republic of Germany, at right, were found by the author in rolls of U.S. coins.

It only takes a few dollars to get started as a roll searcher.

Two dollars is all you need to obtain four rolls of cents or one roll of 5-cent coins. For $5 you can get a roll of dimes, and $10 allows you to pick up a roll of quarter dollars, a roll of half dollars or any number of rolls of different denominations from your local bank.

The types of coins that can be added to your “Found In Rolls” collection can be astounding even if you search through rolls just a few at a time.

To make this point, I looked through $10 worth of Lincoln cents to find all the coins listed in this week’s column.

Lincoln, Wheat cents were scattered throughout the 20 rolls with many of them being early issues.

I actually discovered two of the 1909 cents without the designer’s initials in the rolls, with one of them looking as though it was a metal detector find.

I also found six coins from Panama. The obverse of each coin features the legend REPUBLICA DE PANAMA as well as the denomination of the coin UN CENTESIMO DE BALBOA (translating to “one hundredth of a balboa”).

One of the coins is dated 1996 while five of the coins are dated 2001. On the reverse of each coin is the bust of Urraca, an indigenous chieftain who fought against 16th century Spanish conquistadors.

Urraca is credited with defeating the Spaniards several times; he was the only native leader (among several) who was able to force the Spanish Empire to sign a peace treaty.

While it may seem unusual, the side of the coin that appears to us as the obverse is actually the reverse of the coin. On Panamanian coins, the side that states the legend REPUBLICA DE PANAMA is considered to be the obverse, not the portrait side.

Finally, a coin originating from the Federal Republic of Germany made an appearance.

The obverse features the legend BUNDESREPUBLIK DEUTSCHLAND (Federal Republic of Germany), the date 1972 and a sprig of five oak leaves.

The reverse has a representation of two wheat ears with a D Mint mark for Munich between them, above the denomination