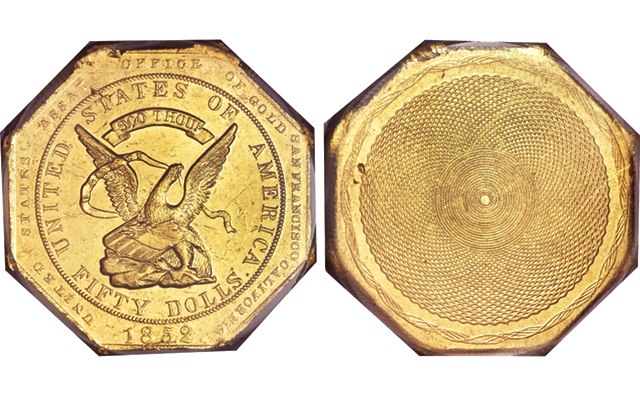 The question on a local coin club quiz — List as many denominations of circulating U.S. coins as you can — seemed simple. The answer was not.

Quizmaster Jonathan Goodfellow prepared the question as a tiebreaker. Two members had answered the previous nine questions correctly. They both had different answers for the tiebreaker.

I anticipated that some club members would insist that a silver 3-cent piece was a different denomination from a copper-nickel 3-cent piece.

As I was the fill-in quizmaster (Goodfellow had moved away by the time the quiz was given), I ruled that a denomination was a coin’s value, regardless of the coin’s metallic content. A dollar is a dollar, be it gold, silver or something else.

John, a Morgan and Peace dollar VAM authority, can always find a different way to look at a coin and at a numismatic question.

What about the Trade dollar?

It has about 2 percent more silver than a Morgan dollar and wasn’t supposed to circulate in the United States.

It was coined to compete in the Orient trade with the Mexican peso.

Issued at a time of dramatically falling silver prices, Morgan and Trade dollars both contained substantially less than $1 worth of silver.

The latter coin says it is a TRADE DOLLAR, but that designation can be interpreted more as a statement of purpose than a denomination.

But that didn’t stop the practice.

And what about the gold $50 slugs issued by the U.S. Assay Office in San Francisco in the years before the San Francisco Mint opened in 1854, John asked?

These massive coins were issued by an agency of the federal government, readily passed in circulation during the Gold Rush and were accepted, by order of the president of the United States, at the customs office in payment of tariffs.

The quizmaster determined the correct answer was open to interpretation and declared both finalists winners.