How I (almost) invented slabbed certified coins in 1976 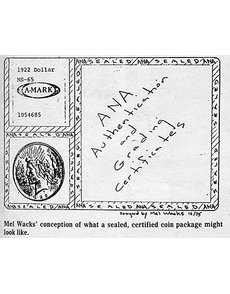 Mel Wacks in late 1975 sketched this concept of a sealed holder that could hold both a coin and its American Numismatic Association Certification Service authentication certificate. 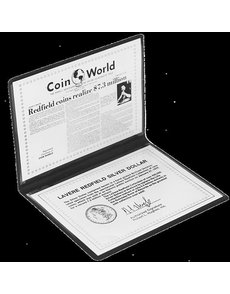 When Robert L. Hughes began selling Redfield Hoard silver dollars in mid-1976, the coins were packaged in holders developed by Mel Wacks. The unsealed holder contained a reproduction of a Coin World news article and a card identifying the coin as being from the Redfield Hoard.

The first coin certification service was established by the American Numismatic Association in 1972 to authenticate coins — and in late 1975 an ANA grading service was under development. It was then that I “proposed a revolutionary new concept for packaging and certifying rare coins” in a talk at the Dealer-Collector Forum sponsored by the Numismatic Association of Southern California, as I related in a bylined news article published in the Jan. 7, 1976, Coin World.

I indicated that “there is always possible doubt that any certificate is accompanied by the original coin, or that the coin has been damaged or tampered with in the interim” — and suggested, “The only complete solution is to permanently seal the coin and its authentication and grading certificates in a tamper-proof package.”

I prophetically concluded, “In the future a collector would probably just as soon purchase a non-certified coin as he would today buy a share of stock from someone on a street corner.”

Little did I foresee that a multimillion dollar business would soon grow from this kernel of an idea — starting with the establishment of the Professional Coin Grading Service in 1985.

I still believe that certification and grading should have been done by only one service, under the auspices of the American Numismatic Association — but that train left the station a long time ago.

A few months after my Coin World article was published, “A-Mark arranged the distribution of the [Redfield Hoard silver dollars] by giving specific dealers rights to certain bags or other quantities. Soon, Paramount International Coin Corp., John Love, Robert Hughes (who later sold many coins to Joel Rettew), and others were advertising or wholesaling groups of Redfield dollars,” according to Silver Dollars & Trade Dollars of the United States by Q. David Bowers.

I was asked by Robert L. Hughes to create a marketing program for the Redfield dollars that he had purchased, and I designed a holder and an ad campaign for “Rare magnificent premium quality Silver Dollars from the Fabulous 7.3 Million Dollar LaVere Redfield Collection in custom protective holders that will each be Certified as a Genuine LaVere Redfield Silver Dollar,” that appeared in Coin World in June of 1976 with the headline “The Era of the Pedigreed Coin is Here!”

I had a feeling that Paramount would find a special way to promote the Redfield dollars that they purchased, and they did, developing holders with grades — but I announced Hughes’ holders first. In order to get the Hughes holders produced quickly, they were not sealed.

The Hughes holder held, in addition to a reproduction of the Feb. 11, 1976, Coin World front page story announcing the Redfield Hoard’s sale for $7.3 million, a card holding the coin indicated, stating: “The Silver Dollar contained herein is a hand picked Brilliant Uncirculated specimen from the spectacular LaVere Redfield Collection of rare coins, which was sold at an historic public auction on January 27, 1976 for a record 7.3 million dollars!”

I wonder if any of these holders still exist.

Oh well, I will have to settle for being the Elisha Gray of numismatics. Elisha Gray submitted his patent for the telephone on the same day as Alexander Graham Bell (Feb. 14, 1876), but after that he essentially stopped any further development of the technology.