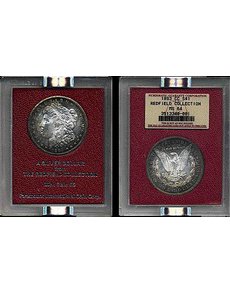 The Redfield Hoard was not all common-date coins. For example, an 1893-CC Morgan dollar in a Paramount MS-65 holder from the hoard with an NGC grade of MS-64 realized $8,912.50 in a June Heritage auction.

Few coin hoards are as memorable as the group of Morgan and Peace dollars amassed by LaVere Redfield over five decades.

Although the hoard was not the largest group of silver dollars that entered the marketplace in the 1970s and 1980s, it was perhaps the best-marketed hoard.

The hoard was acquired in 1976 for $7.3 million by Steve Markoff’s A-Mark Coin Co. in Beverly Hills, Calif. The firm had to work quickly to repay the hoard acquisition loans, balancing the need to pay with the risk of overburdening the market. It devised a three-year marketing plan for most of the coins with three dealers designated as the primary distributors, with the dealers agreeing to a nondisclosure contract stating that they would not release the dispersal plan nor the hoard’s contents.

Paramount International Coin Corp., in Englewood, Ohio, was one of the firms selected, and for marketing purposes, it graded the coins either Mint State 60 or MS-65.

The MS-65 examples were sealed in plastic with a red insert. David W. Akers, who was Paramount’s executive vice president in 1976 when the firm started to market the dollars, told Coin World in 2010: “There is no such thing as a ‘true grade’ of any coin since a grade can change with the times and the grading standards used which are constantly evolving, but in 1976 only those two grades were used. There were no interim steps. By today’s single point grading (and soon to be half point grading) the coins in any single grade Redfield holder could vary over a range now. That is, MS-60 Redfield coins could be -60 to -62 today and -65 Redfield coins could grade anywhere from -63 to -65 as a general rule of thumb.”

Also different in 1976: the market did not really pay attention to quality in the way it does today. “MS-65 basically meant an above average coin that was noticeably better than a 60 and was priced accordingly,” according to Akers. “Today, of course, a coin graded -65 can be worth many, many multiples of what a -60 is (or even a -64) but in 1976 that was not the case. A ‘65’ was priced higher than what the same date in a ‘60’ holder was priced, but the difference was actually relatively little when compared to the difference today.”

In today’s rare coin market, silver dollars from the Redfield Hoard in their original red Paramount holders sell for a substantial premium in the marketplace to “raw” examples in comparable grades. Numismatic Guaranty Corp. has added liquidity to the market by certifying these in their original holders. For example, in an April 2012 Heritage auction, an 1880-S Morgan dollar in a Paramount MS-65 holder with an NGC grade of MS-63 realized $161. For comparison, a typical MS-63 dollar sold for $55 at the time. ¦