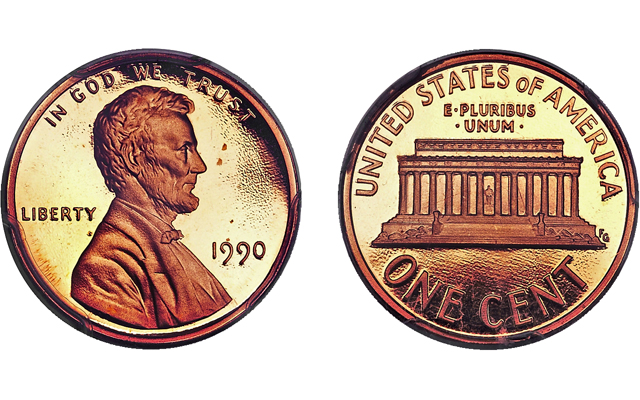 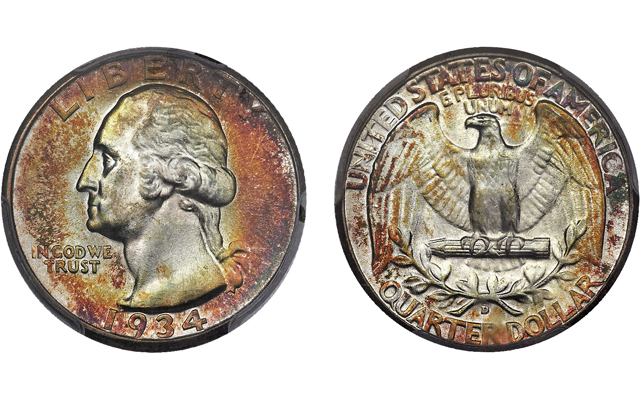 This 1934-D Washington quarter dollar of the Heavy Motto variety in PCGS MS-67 with a green CAC sticker brought just under $10,000.

Editor's note: This is one of three posts covering the results of Heritage Auctions' sales at the Houston Money Show between Dec. 4 and 7.

Among the modern rarities sold during the Houston Money Show auctions was a 1990-S Lincoln, No S cent graded Proof 69 Deep Cameo by Professional Coin Grading Service, brought $8,812.50. This coveted modern rarity is from an estimated mintage of just 3,555 pieces and the error was created when Proof cents were struck at the San Francisco Mint from dies missing the San Francisco “S” Mint mark. Heritage notes, however, ”Such an error theoretically should not have been possible, as beginning in 1985, mintmarks were included on the master hubs, rather than being added after the fact. A feasible explanation, however, suggests that a regular Philadelphia die was polished and sand-blasted for proof coinage in San Francisco, thus explaining the missing mintmark.”

The variety is ranked number 13 in the book 100 Greatest U.S. Modern Coins and is one of only a few dozen certified in this grade. A different example in the same grade brought $8,518.75 at a Heritage auction this past August.

A 1934-D Washington quarter dollar of the Heavy Motto variety graded PCGS MS-67 and with a green CAC sticker brought a strong $9,987.50. A Guide Book of United States Coins notes Light and Heavy Motto varieties for Philadelphia Mint 1934 Washington quarters, but PCGS recognizes the variety on 1934 quarter dollars from both the Philadelphia and Denver Mints.

The 1934-D Heavy Motto quarter dollar is sought after by collectors completing a PCGS Registry Set that includes major varieties. PCGS has graded just four in this grade with none finer and Heritage describes the handsome coin as follows: “Silver interiors, broader on the frosty reverse, give way to bold violet-orange and ocean-blue color around the margins, while the design definition is quite simply immaculate.”