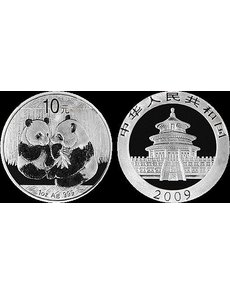 These counterfeit Panda 1-ounce silver bullion coins are believed to have been produced in China. The firm Coins+ in Cincinnati reported in February that it purchased 42 of these coins of various dates but only later found out the coins were counterfeit.

The U.S. House of Representatives has taken another step toward amending the Hobby Protection Act by approving a recently introduced bill, the second piece of legislation dealing with the topic introduced in the House this year.

H.R. 2754, the Collectible Coin Protection Act, introduced by Rep. G.K. Butterfield, D-N.C., on July 19, was approved by a voice vote of the House on July 30 in response to a motion to suspend the rules and pass the bill.

The motion was agreed to without objection, after 40 minutes of debate. It now goes to the Senate.

The bill seeks expansion of the Hobby Protection Act to cover sales of replica numismatic items that violate the act, and also to afford greater trademark protection to grading services’ slabs.

The legislation is in response to the continued threat from Chinese-made counterfeit coins being sold through online auction sites, flea markets and other venues.

The act, if it becomes law, would include the sale of counterfeit coins among the prohibitions found in the Hobby Protection Act, and expand the federal venue and remedies available to victims of counterfeiting.

Smith co-sponsored Butterfield’s bill as did others.

Smith’s bill renders the statement as “consciously avoids knowing” rather than “should have known.”

Currently, the Hobby Protection Act is somewhat more limited in what it regulates. The act states the “manufacture in the United States, or the importation into the United States, for introduction into or distribution in commerce of any imitation numismatic item which is not plainly and permanently marked ‘copy’, is unlawful and is an unfair or deceptive act or practice in commerce.”

The new legislation also adds a section to the act on trademark violations regarding the “unauthorized use of registered trademarks belonging to a collectibles certification service,” defined in the bill as “a person recognized by collectors for providing independent certification that collectible items are genuine.”

In a statement on the floor of the House, Butterfield said, “Manufacturing and selling imitation coins is a little-known black market industry here in the United States.”

Butterfield described the sale of fake coins to unsuspecting collectors as “big business” and said it “cuts to the very core of our ability to control and regulate the currency. By the time the collector realizes that he has been scammed, it is absolutely too late.”

“This bill would also extend trademark infringement protections available under the Trademark Act of 1946 for unauthorized use of a registered trademark in connection with an unlawful sale or other violation involving an imitation coin,” he said.

Rep. Michael C. Burgess, R-Texas, said that H.R. 2754 “is a simple bill with a simple purpose: to equip honest merchants and collectors as well as the federal government with the tools needed to fight a new wave of counterfeit coins and currency.”

He noted that in the last decade, the U.S. Treasury has taken “extraordinary steps to make it difficult to counterfeit U.S. currency.”

Burgess pointed to “criminals” who have also “cleverly taken advantage of the certification system used by collectors to assure authenticity, and they’ve turned it on its head.”

“The slab is designed to protect the coin, but it also protects the integrity of the grading,” Burgess said. “If the slab is tampered with, the grading is voided. Some counterfeiters have now realized they can counterfeit the slab and the certificate as well. This has the advantage of making it harder to examine the coin since dealers are reluctant to break open the slab to examine the coin more closely unless they are absolutely certain that it is a fake.” ¦