House bills call for switch to steel for cent, 5-cent 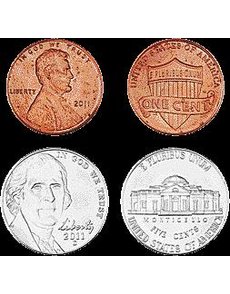 Two bills introduced in the House of Representatives seek to change the composition of the cent and 5-cent coin to steel within 90 days of enactment. The measures would require the colors of the two coins to approximate their current colors.

Two bills were introduced in the House of Representatives on Dec. 15 calling for changes in the composition of the cent and 5-cent coin to lower their production costs and to ensure that they are produced with American-made steel.

H.R. 3693 and H.R. 3694 were introduced by Rep. Steve Stivers, R-Ohio, and both bills have been referred to the House Committee on Financial Services where they each sit with two co-sponsors, Reps. Tim Ryan, D-Ohio, and Pat Tiberi, R-Ohio.

Rep. Stivers noted in a Dec. 15 statement that for the fiscal year ending Sept. 30, 2010, the cost to create a cent was 1.79 cents, while a 5-cent coin cost 9.22 cents to produce. He cited a House Financial Services Committee report that said that by changing the composition of the cent and 5-cent to steel, the government would potentially save taxpayers $274 million in cent production and $159 million in the production of 5-cent coins for a total savings of up to $433 million over 10 years. The bills have been endorsed by the American Iron and Steel Institute.

Similar legislation aimed at changing the composition of the cent was introduced in the House in 2007, but was unsuccessful. That bill pointed out that Canada has successfully produced a cent made of steel and noted that the United States produced a cent in 1943 out of zinc-coated steel, as copper was needed for World War II.

H.R. 3693 — the “Cents and Sensibility Act” — seeks to amend Title 31, United States Code, “to save the American taxpayers money by immediately altering the metallic composition of the 1-cent coin, to require a prompt review and report, with recommendations, for cost-saving changes in the metallic content of other circulating United States coins, and for other purposes.”

H.R. 3694 — the “Saving Taxpayer Expenditures by Employing Less Imported Nickel Act,” or the STEEL Nickel Act — calls for the composition of the 5-cent coin to change from its current 75 percent copper 25 percent nickel composition to a primarily steel composition. Like the cent legislation, it calls for the steel 5-cent coin to be treated to impart a color for an appearance similar to the copper-nickel 5-cent piece. Also like the cent legislation, it provides for American-produced steel to be used in making the coins, subject to the same limitations.

The bill acknowledges the 5-cent coin’s use in the vending machine industry by limiting the Treasury secretary from setting specifications that would require more than one change to coin-accepting and coin-handling equipment to accommodate the new steel 5-cent coins. It also provides that the change has to account for the potential for fraud in vending machines by not allowing the new coin to be interchangeable in vending machines with a coin of lesser value produced by another country.

In both cases the changes would become effective 90 days after the enactment of the respective bill.

The two bills relate to the Coin Modernization, Oversight, and Continuity Act of 2010, Public Law 111-302, which was signed by President Barack Obama on Dec. 14, 2010. That act gave the Treasury secretary and the United States Mint the authority to research and develop different compositions of circulating coins and to report findings on the modernization to Congress. Section 3(b) calls for detailed recommendations for any appropriate changes to the metallic content of circulating coins in such a form that the recommendations could be enacted into law as appropriate.

Rep. Stivers called his legislation, “a common-sense solution to decrease the cost of minting pennies and nickels,” adding, “Not only will it cost less, but steel is an American resource that we have and can manufacture right here in our backyard.” ¦