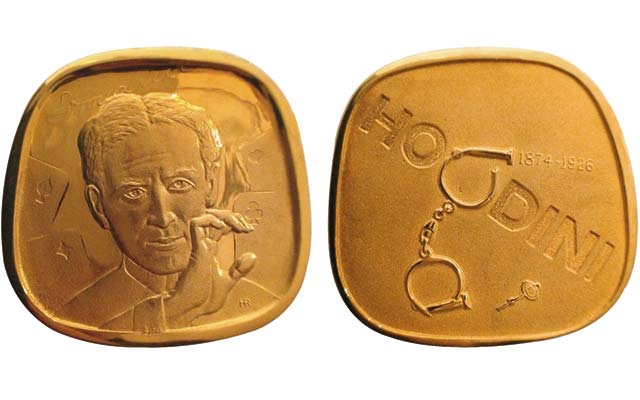 A Harry Houdini medal from the Jewish-American Hall of Fame series poses quite a mystery. Two sides of a two-part (four-sided) normal gold example appear here.

I just read your article about Jewish-American Hall of Fame medals (Coin World, July 30, 2012, issue) and wondered if you might be able to tell me what I have. In 2013 I bought one half of the Harry Houdini pair and I’ve recently been fortunate enough to purchase both parts (the Houdini medal was issued with two parts opening to reveal four “sides”).

Mel Wacks, the creative force behind the JAHF medal program, told Coin World that he has seen individual parts sold as the whole medal.

Wacks initially suspected that Meister had a rare gold example of the medal, but a gold medal would bear edge inscriptions and weigh 55.6 grams, so that possibility was ruled out.

Wacks said that bronze versions of the Houdini medals were made at the same mint, in two separate production runs, but they should have edge markings.

“The unmarked half seems to have narrow polish edges and polishing on the hand-cuff and key which surprises me,” Wacks wrote. “But the weight tells me this half is a bronze medal. I don’t understand why there is no edge markings.”

All JAHF medal have edge numbers, with the exception of a few patterns provided by whichever mint Wacks hired to strike the medal. Sometimes, after running out of the normal medals, Wacks would sell the pattern, which lacked any of the edge markings.

He does not have records of selling the sample for the Houdini medal, Wacks said.

“But that doesn’t mean I didn’t. Sometimes I keep them and sometimes I sell them. Maybe it will have to remain another Houdini mystery.”