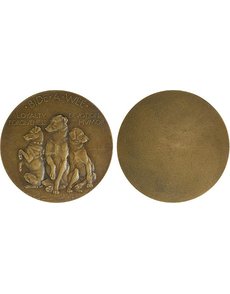 One of 20th century America’s greatest sculptors was Laura Gardin Fraser. A Chicago native, she was identified with New York City and Connecticut throughout her professional career. As the youthful Laura Gardin, she studied at the Art Students League in 1907 to 1910, a pupil of James Earle Fraser.

She created notable medals for organizations of animal fanciers, such as the Morgan Horse Club and the Irish Setter Club of America in the early 1920s. With its precise rendering of the setter and an Irish harp, the latter medal shows her skill in depicting specific breeds. In 1930, her portraits of Arctic flier Adm. Richard Byrd and Col. Charles Augustus Lindbergh demonstrated her mastery both of portraiture and the excitement of pioneer aviation.

Later in life she created the Oklahoma Run medal with a design depicting a land rush of pioneer settlers, horses, mules, dogs and wagons in frantic motion. Her imaginative design for the American Numismatic Society’s 50th anniversary in 1958 suggested how accidentally splitting a rock with a fossil inside might have suggested the concept of dies to a muscular dawn man.

One of her most successful animal medals honored Bide-A-Wee, a prominent facility rescuing dogs, cats and all manner of other animals, protecting them and making them available to qualified pet lovers for adoption. Founded in 1903 by Flora D’Auby Jenkins Kibbe, Bide-A-Wee (now rendered Bideawee) has devoted 108 years to its work in facilities on Manhattan’s East 38 Street, and on Long Island at Wantagh and Westhampton.

Named for the Scottish expression “Stay a While,” the organization maintains facilities for rescue, adoption, training of pet owners in proper care of animals and even operates pet cemeteries.

The uniface (one-sided) bronze Bide-A-Wee medal is undated, but is signed laura gardin sculptor, which would seem to date it before her marriage in 1913.

It measures 70 millimeters and is 3.5 millimeters thick at 6:00, with edge inscribed medallic art co. n.y. The obverse presents three dogs, the leftmost sitting upright with collar and harness, the center a taller dog with one paw raised, the right a dog with heavier snout gazing right. The legend reads bide a wee, loyalty — devotion, forgiveness — humor.

The scarce medal has fascinated generations of animal lovers.