Found coin offers a mystery through thousands of miles, millennia 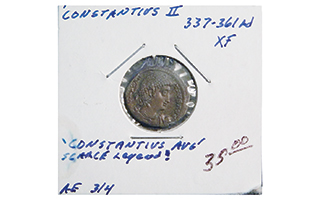 When I hear the term "found coins," I usually think of Coin World columnist Bill ORoukes discoveries in bank rolls. But there is another type of found coin, as many home hobbyists might attest: a coin we have no recollection of buying that one day turns up like a lost sock in the least likely place.

Recently I was cleaning out the bathroom closet stuffed with expired-date vitamins and old prescription bottles, when I discovered on a shelf an ancient Roman coin in a flip with these markings: Obverse: Constantius II 337-361 AD XF, $35. Reverse: "Gloria Exercitus," 2 soldiers on either side of labarum. Antioch mint.

I dont collect ancient coins, but a good friend of mine, Tom Beell, does. It could be that I purchased the coin for him and neglected to give it to him. Perhaps it ended up on the shelf as I emptied bathroom contents from a travel bag.

Honestly, I have no memory of purchasing this coin, which, I might add, is exceedingly well struck and in a condition I would rate as About Uncirculated.

The coin has lain on my bedroom nightstand for several weeks as I ponder what to do with it. Considering how far the coin has traveled, in time and distance — more than 1,650 years and 5,000 miles — it seems appropriate that I write about it while doing a little research.

The obverse celebrates Constantius II, the second son of Constantine the Great (the first Christian emperor) and Empress Fausta. After his father died in 337, Constantius ascended to the throne with two brothers, both of whom perished by 351, leaving him sole ruler.

Constantius spent most of his life plotting against usurpers and fighting wars to solidify his rule, finally succumbing to illness in 361.

The legend on the obverse, CONSTANTIUS AVG, uses that Roman abbreviation as an honorific title, "Augustus," bestowed on Emperor Octavian in 27 B.C. and adopted by successors as a symbol of supreme authority.

The reverse legends are equally fascinating. GLORIA EXERCITUS, loosely translated, means "Glory of the Army." In the reigns of Constantine and his sons, that phrase often is illustrated by two soldiers on either side of a "labarum," a Roman military ensign. Constantine the Great changed that ensign slightly, adding a piece of wood to the pike to form a cross.

Ancient coins are full of history, and the designs are symbolic, echoing through the ages.

After this column is published, I will give my found coin to my friend Tom, for whom it probably was originally intended.