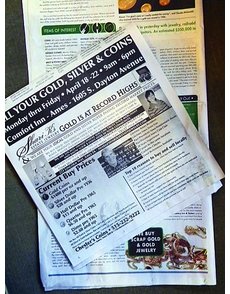 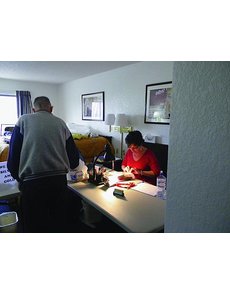 Local jeweler Shari Busse buys items at a room in the Comfort Inn, competing against Ohio Valley Gold and Silver Refinery. The Comfort Inn was located a short distance from the Ohio Valley’s hotel location. 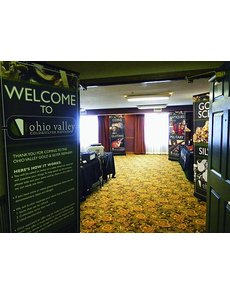 Ohio Valley Gold and Silver Refinery puts on a vivid display at the Country Inn and Suites Hotel. 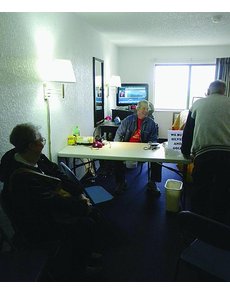 Scott Nichols, owner of Chester’s Coins and Gifts in Ames, Iowa, complained earlier in the year when the International Coin Collectors Association came through town, buying silver and rare coins reportedly below melt value at a local hotel.

When ICCA’s sister company, Ohio Valley Gold and Silver Refinery, announced that it, too, was coming to Ames, Nichols didn’t get angry. He got competitive.

He and local jeweler Shari Busse decided to start a numismatic price war when they heard that Ohio Valley was setting up shop in April at the Country Inn and Suites.

THR and Associates, a Springfield, Ill., firm, owns Ohio Valley along with ICCA and other similar road show companies.

Nichols and Busse booked a room at the Comfort Inn, a football field away from the Country Inn and Suites on the same street. Only the Comfort Inn is at the corner of a well-traveled intersection, whereas the Country Inn is near a dead-end with no access to other thoroughfares. In other words, not only did the two hotels have similar-sounding names on the same street, you couldn’t miss Nichols’ hotel and needed directions to find the Ohio Valley one.

Score one for the locals.

Predictably, Nichols and Busse set up signage along the intersection, proclaiming “Coin Show” and “We Buy Gold.” Some folks looking for the Ohio Valley buying team probably mistook Nichols and Busse for their competitor.

“The best thing was you had to pass our hotel to get to theirs,” Nichols said.

But the competition didn’t end there. It also raged in the town newspaper, The Ames Tribune.

Iowa State University is located in Ames, whose residents are persnickety about home-team colors. Ohio Valley took out a full page in Ohio University colors (white and green) rather than in ISU’s cardinal and gold.

Ohio Valley’s one-page advertisement was designed to look like a news story, written by “staff writers,” in tiny 10- and 11-point text. One stock photo featured a gray-haired couple seated at a buyer’s table. Odds are they wouldn’t have been able to read the fine print consuming much of the page.

“The first days of the 5 day reclamation drive in Ames were a hit with those looking to sell their gold and silver. An estimated 55 people left the event with over $200 from old class rings, wedding banks, herringbones and gold teeth. Coins dated 1964 and earlier were bringing big premiums as well. Silver dollars, halves and quarters arrived in large quantities. Lots of gold coins were also brought in.”

A quick Internet search accessed the same advertisement in a half dozen town newspapers. In Manchester, N.H., for example, “Staff Writer” Christina Butler had the same headline and lead in her newspaper story. Ironically, another 55 people left that event in Manchester with the same checks for the same items as in Ames.

Not to be outdone, Nichols and Busse took out a half-page advertisement in standard black and white, with large type fonts and photographs of themselves. The ad got right to the point with pictures of specific gold and silver coins and how much Nichols was going to pay:

“Silver was $40 per ounce at the time the ad was put together but silver spot prices went up during the week so I was paying more than advertised,” he explained.

Dana Denning, a local resident, did not sell to Nichols but to Ohio Valley. She brought six silver dimes and quarter dollars along with Lincoln, Wheat cents, all found years ago when she worked at a supermarket. (She now works at ISU.)

“When mentioned this, I was told, ‘We’ll match that — no problem.’ So they told me they’d pay $69. But then they took 10 percent off the top of the price to pay for expenses so that they could afford food, travel and the hotel.

“That makes no sense to me,” she said.

Matthew Enright, vice president of media for THR and Associates, said, “Obviously I wasn’t there for this transaction.” He noted that Ohio Valley “had several ‘shoppers’ from the other company come to see what we were paying to our customers for coins.”

“Was the ‘customer’ a real customer or a competitor? No one really knows,” he said.

Enright added that his companies have paid “in excess of $14,000 for different coins and as little as 3 cents for a Wheat penny.”

Buying coins all depends on condition and rarity, Enright added. “For instance, an 1894-O Morgan is worth much less than an 1894. We take all those factors into consideration. On average, we pay more than 30 percent over what local dealers pay.”

Enright said he wasn’t bothered by Nichols’ taking out an advertisement and buying coins. “It’s just competition. We welcome that. Before anyone sells coins, though, they need to do research and see what their coins are worth.

“Nine times out of ten we can pay more,” Enright said.

Shari Busse, who bought hundreds of dollars’ worth of gold jewelry, said it’s not only about money. “I take great care with my customers’ best interests in mind. I treat people as I would like to be treated — fairly and honestly.

“I had a great time” competing against Ohio Valley, she added. “The public was happy to come and sell to local dealers.”

In the end, Nichols and Busse said they not only recouped their expenses for the hotel room and newspaper advertisements, but also made a profit.

“I can’t say we made a killing, but it was definitely worth it,” Nichols said. “In the future I will advertise every time they come to town. Probably I will do the motel thing again, as it was fun to look out the window toward their motel and see an empty parking lot.”