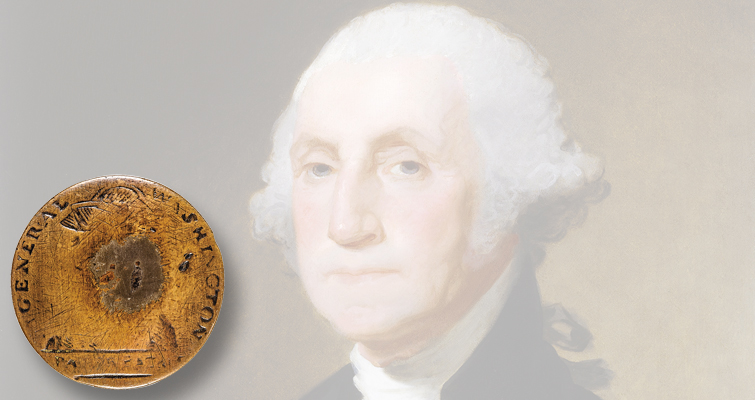 A number of types of commemorative buttons were produced to mark the 1789 inauguration of George Washington as the nation's first president.

One of no more than seven examples known of the PATER PATRIAE type of George Washington inaugural button is being offered in Fine with a pre-sale estimate of $30,000 to $40,000. 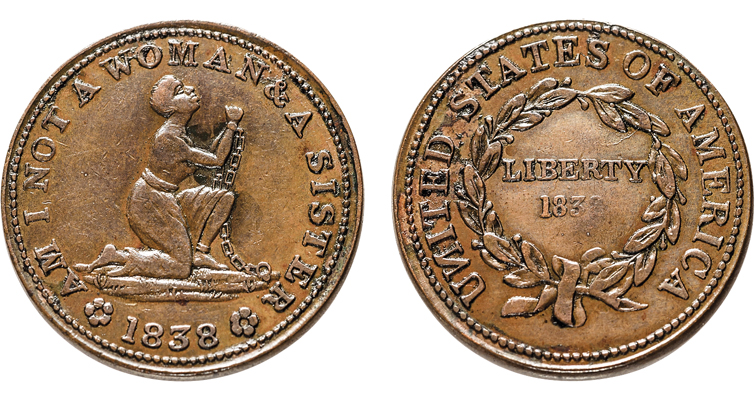 Estimated at $400 to $500 is a choice About Uncirculated example of the Am I Not A Woman and A Sister 1838 anti-slavery token in copper. 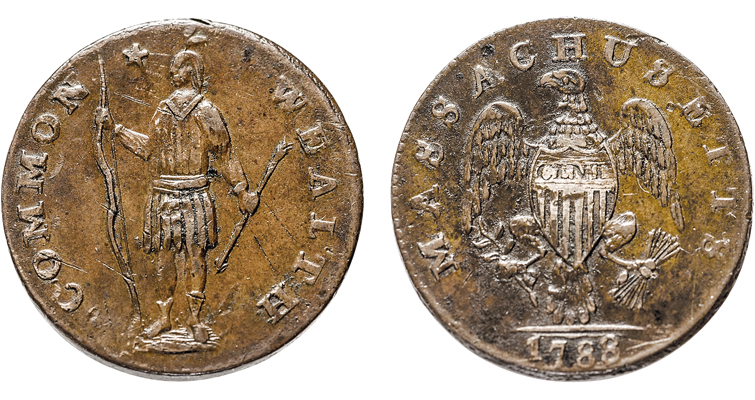 1788 Massachusetts cent in Extremely Fine to About Uncirculated condition is offered in the June 23 sale by Early American History Auctions.

One of just seven purportedly known examples of the Holy Grail of George Washington presidential inaugural buttons is being offered by Early American History Auctions in its June 23 online sale.

The button, in Fine condition, carries an estimate of $30,000 to $40,000. The Pater Patriae design type, DeWitt GW-1789-41 as attributed in Century of Campaign Buttons  1789–1889 by J. Doyle DeWitte, depicts Washington in full military uniform. The 25-millimeter copper shell is lead-filled as made and bears the original shank.

The central Washington portrait is heavily worn, as is the PATER PATRIAE inscription along the bottom of the button.

The auction includes an About Uncirculated example of the 1838-dated anti-slavery Am I Not A Woman and A Sister token, Low 54 (Hard Times Tokens by Lyman H. Low).

The tokens features a black woman kneeling on her right knee, her hands shackled and pleading for humanity. The reverse is inscribed LIBERTY / 1838 with a wreath and UNITED STATES OF AMERICA around. The estimate is $400 to $500.

A 1788 Massachusetts cent in the sale is cataloged as Ryder 1-D (The Copper Coins of Massachusetts by Hillyer Ryder) and described as being in Extremely Fine to About Uncirculated condition.

The cent features a Native American brave on the obverse with a bow in his right hand and an arrow in his left. COMMON WEALTH is separated by the man and a five-point star. On the reverse is an eagle with shield on its breast, the date 1788 below, and MASSACHUSETTS around the top border followed by a period.