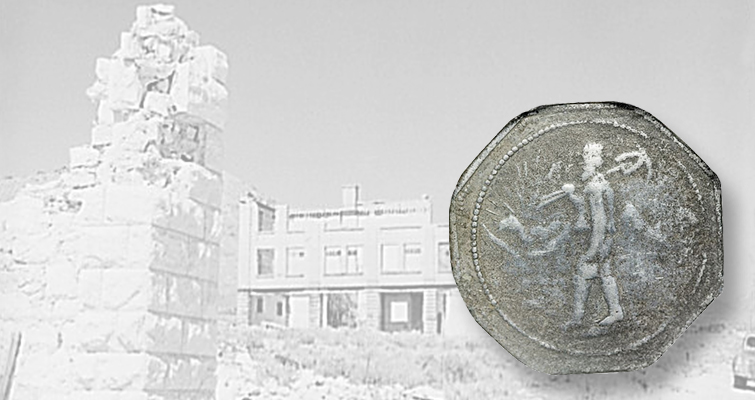 A miner walks across the obverse of rare trade token issued in the early 20th century in Nevada, in Rhyolite, now a ghost town. 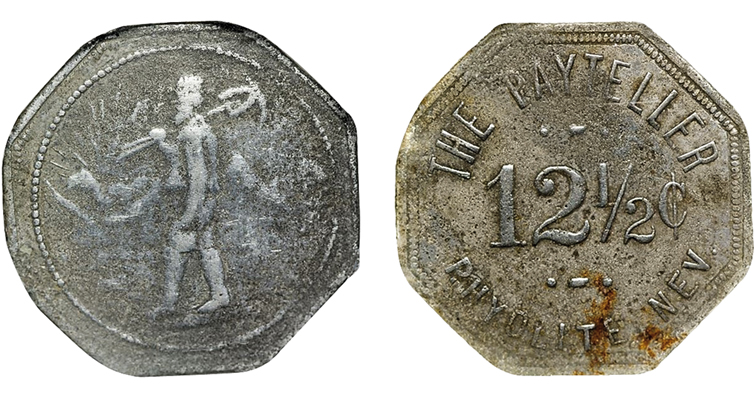 A miner walks across the obverse of rare trade token issued in the early 20th century in Nevada, in Rhyolite, now a ghost town. The token's reverse reveals it was good for 12½ ¢ at the Payteller, a commercial concern in the boom town. 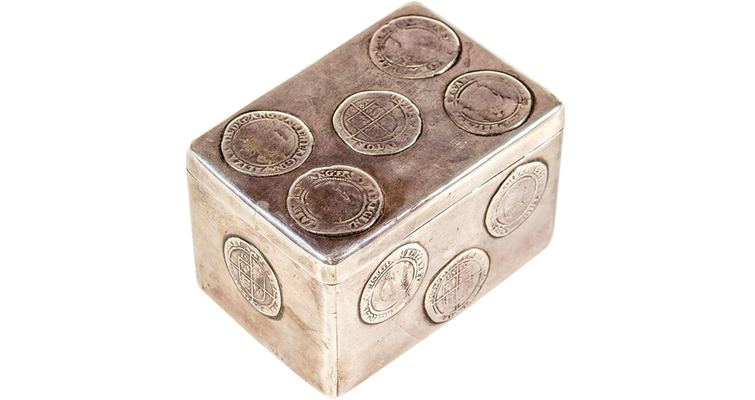 British silver coin box from 1793, bearing 13 silver sixpence coins, is hallmarked as having been made by Exeter, a British silversmith concern. 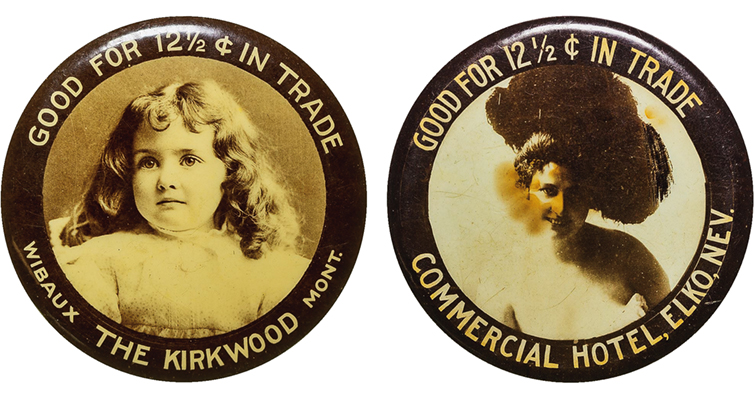 Merchant advertising mirrors "Good for 12½ ¢ in Trade" carry a stock image and issuer information on the obverse and have a mirror on the reverse.

A rare trade token issued during the heyday of Rhyolite, Nev. (now a ghost town), highlights the Oct. 2, 3 and 4 portion of the Million Dollar Auction by Holabird Western American Collections LLC.

A 20 percent buyer’s premium is added to the final closing hammer price of each lot won.

Octagonal, 30 millimeters in diameter and struck in aluminum, the token, bears an obverse pictorial design featuring a bearded miner carrying a pick and shovel over his right shoulder and carrying a lunch bucket in his left hand. A mountain and rising sun are in background on the piece, struck by L.H. Moise in San Francisco. It is attributed as Rc-5 in Nevada Trade Tokens by Len Hoskins, John Schilling and Hal Dunn.

Located in Nevada's Bullfrog Hills and situated near the eastern edge of Death Valley, Rhyolite began life in 1905 as one of several mining camps that sprang up in the region after a prospector discovered gold.

Rhyolite, named after a type of volcanic rock, was built near the region's biggest mining operation, the Montgomery Shoshone Mine.

Industrialist Charles M. Schwab bought the mine in 1906 and invested heavily in the mine and town's infrastructure, bringing water, electric lines and railroad transportation. The town's population at its peak, circa 1907 and 1908, was between 3,500 and 5,000 people.

Rhyolite's economy collapsed almost as quickly as it was built when the mine's richest ore was exhausted. The 1906 San Francisco earthquake and financial panic of 1907 made it difficult to raise operating capital. With the mine operating at a loss in 1910, operations closed in 1911. By 1920, the population dwindled to almost zero.

According to Hal V. Dunn and Duane H. Feisel in Nevada Trade Token Place Names, the post office in Rhyolite, Nev., closed in 1919.

Today, Rhyolite is a ghost town, a destination for tourists and location for motion picture filming.

The Oct. 2 session offers an extensive listing of "good for trade" mirrors that bear a design, issuer and its location, and what the mirror was good for in trade identified on the obverse. The reverse exhibits a functional mirror.

Among the listings are two 56-millimeter "Good for 12½ ¢ in Trade" mirrors: one issued by The Kirkwood in Wibaux, Mont., and the other by the Commercial Hotel in Elko, Nev.

The Kirkwood piece bears a stock image of a young girl with long hair. It is attributed as MT-W25-K5A in Hal V. Dunn's Catalog of Western Good For Trade Mirrors. Despite the mirror exhibiting cracks along the rim, the piece carries a pre-sale estimate of $2,000 to $4,000.

The Commercial Hotel trade mirror depicts an obverse portrait of a saloon girl with feathered headgear. According to the auction lot description, the Commercial, built in 1869, "was originally named the Humboldt Lodging House. It was purchased in 1893 and renamed Commercial in 1941, with the advent of the legalized gaming in Nevada."

Eleven sixpence date from the reign of Elizabeth I with coins dating from 1561 to 1580. The remaining two, from James I, are dated 1604.

According to the auction lot description, the box is believed by one of its previous owners to have been fabricated as a wedding gift circa 1796.