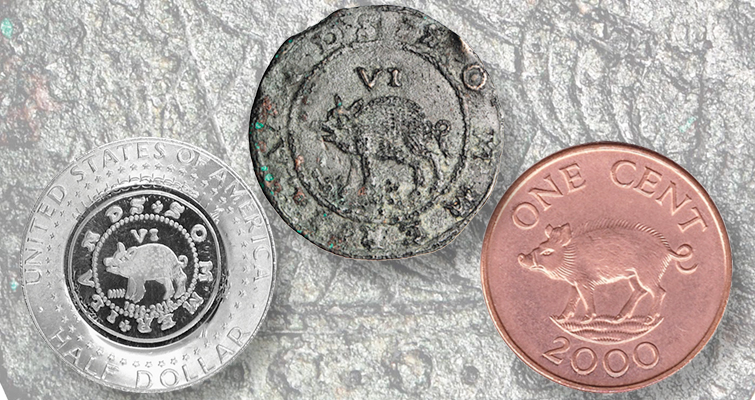 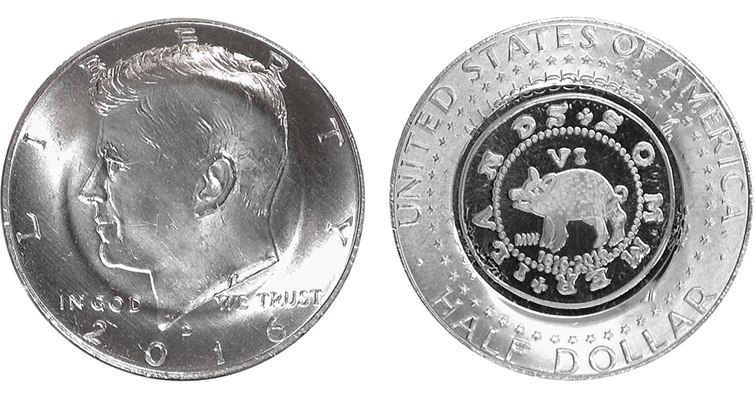 Mel Wacks has issued a limited number of counter­stamped 2016 Kennedy half dollars that celebrate the 400th anniversary of Bermuda’s Hogge money. The coins are available for purchase from Wacks. 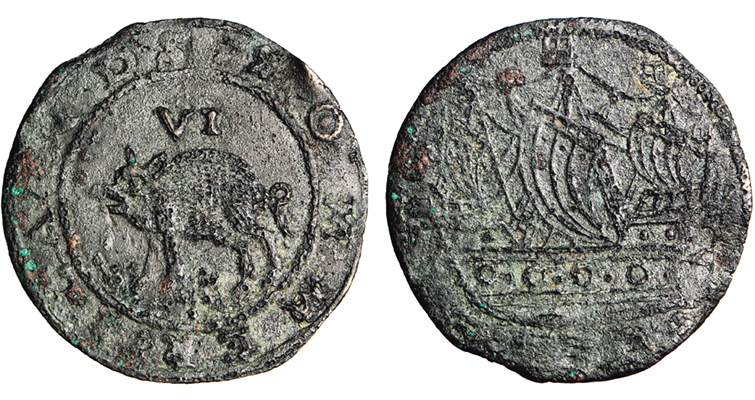 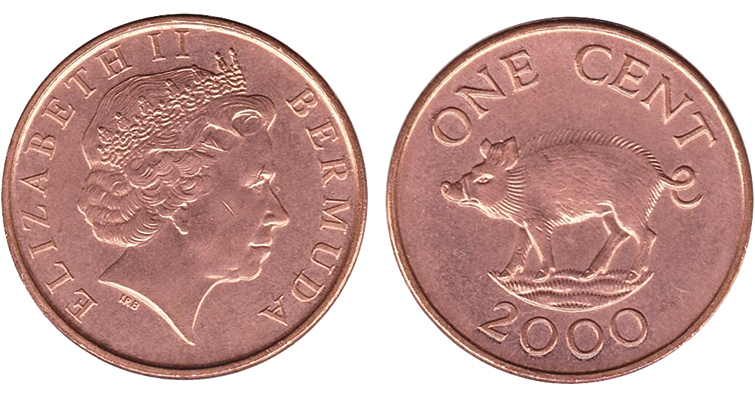 Bermuda’s connection to its famed Hogge money continues with the design of the 1-cent coin issued from 1970 to the present.

The crude coins issued 400 years ago are the first items listed in the standard reference known informally as the “Red Book.”

They are considered the earliest coinage for any English-speaking region in the New World.

A hobbyist is celebrating the anniversary of Hogge Money with overstamped 2016 Kennedy half dollars. Mel Wacks of Woodland Hills, Calif., has issued 200 examples of the counterstamped half dollars.

The original Hogge Money is named for the hog appearing on the obverse of the coins, which were issued in 1616 in 2-, 3-, 6-, and 12-penny denominations.

The territory for which the pieces were issued was often called Hogge Islands because of the numerous black hogs that ran wild there. Some sources indicate they escaped a shipwreck of Juan de Bermudez in 1532.

Other sources suggest that Bermudez left the hogs there purposely, as a food supply for any unlucky mariners who might land there unexpectedly. Whatever the source, the animal’s abundance explains the coin design.

Though Bermudez landed on the islands in the 1530s, decades passed before Bermuda was settled.

In 1609, the Sea Venture was the flagship of a nine-ship provisioning fleet sent from Plymouth, England, to the Jamestown Colony in Virginia.

Captained by Adm. Sir George Somers — for whom the Bermuda Islands would be initially renamed when the English crown claimed them — the Sea Venture became separated from its fleet in a hurricane, landing at Bermuda three days later.

After living there for several months and building a new boat, the crew sailed away in 1610, but Somers returned shortly thereafter, remaining until he died there in 1611.

By 1615 a colony was founded on Somers Islands, but the colonists lacked money, so bartering was employed.

To keep the coins from being exported out of the islands, they were intentionally made in a crude fashion from a low-grade brassy copper. Their appearance was enhanced only by a thin wash of silver, which did not hold up well in the salty Bermuda environment, according to Louis Jordan of the Department of Special Collections at the Notre Dame Library.

The obverse shows a hog with the denomination in Roman numerals above the animal and the legend SOMMER ISLANDS within two circles of beads (the twopence and threepence coins have only a single circle of beads, without the island name).

The reverse displays a ship, most likely the Sea Venture (the ship is known by various names historically), with a single circle of beads around the border and no legend (the twopence and threepence denominations have an S to the left of the ship and an I to the right, for Sommer Islands).

Today Bermuda honors its legacy by showing a hog on its 1-cent coin.

The counterstamp design created by Mel Wacks features an image derived from an undated 1616 sixpence that Heritage Auctions sold for more than $125,000 in 2015.

These Hogge Money Quadricentennial commemoratives are available for $39.50 each plus $5 shipping from Wacks.

Each coin is accompanied by a certificate of authenticity.

Coin World readers are eligible for a 20 percent discount by mentioning the publication’s name.

This piece is the 24th counterstamped coin Wacks has issued. The catalog of his counterstamps can be seen online. 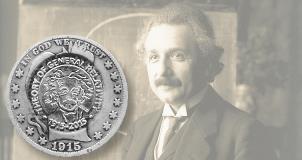 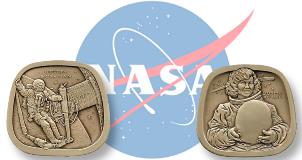 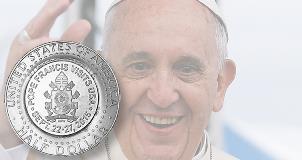