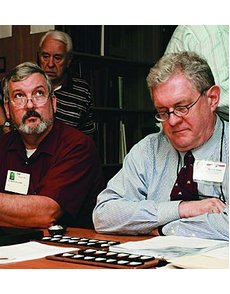 During the July 2006 American Numismatic Society Conversation on Connecticut Coppers, Robert W. Hoge, right, showed an extensive selection of late 18th century Connecticut coinage to a live audience of 34 amateur and professional numismatists assembled at the ANS headquarters in New York City. In addition, other enthusiasts and experts viewed the program live via the Internet. Colonial coin specialist and numismatist Ray Williams is to Hoge’s immediate right and Donald G. Partrick, who was president of the ANS Board of Trustees at the time, is visible behind Williams. 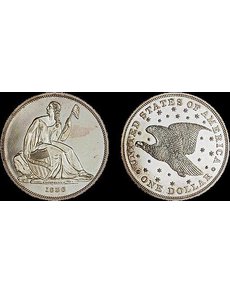 This 1836 Gobrecht dollar, Judd 60 (United States Pattern Coins by J. Hewitt Judd, edited by Q. David Bowers), is the earliest die state of the series. According to the American Numismatic Society, it is possibly the only true Proof Gobrecht dollar. It was part of the Julius Korein bequest to the ANS. 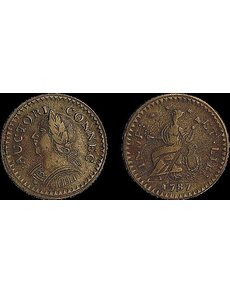 This 1787 Connecticut copper Laughing Head coin is in the American Numismatic Society’s collection and was among the pieces displayed in the 2006 “conversation.”

Hoge served for 12 years as the curator of North American Coins and Currency at the American Numismatic Society. In April he officially retired and took on the title of curator emeritus.

“I’m still exploring what all the title entails,” he said, during an interview Oct. 4 with Coin World from the ANS offices on the 11th floor of 75 Varick St. in New York City.

While at the ANS, Hoge served as curator for the North American section, “but also [for] the Medals, Latin American, Medieval, and entire Modern departments and, following the retirement of Michael Bates, of the Islamic, South and East Asian departments as well. It was fortunate that he knew not only French, Spanish and Latin, but had studied Chinese, Arabic and Urdu as well,” acknowledges an ANS news release summarizing his duties.

Following his father’s discharge from the U.S. Army, Hoge and his family moved to Colorado.

He began to develop a focus on exploration when he announced to his family that he wanted to be an archaeologist. He was 4 years old, he said.

His mother’s uncle was an archaeologist and some of Hoge’s interest could have been the result of that influence, he said.

By 1956 his lifelong love of history had kicked in after watching the film adaptation of Leo Tolstoy’s novel War and Peace, starring Henry Fonda.

“From then on I wanted to collect militaria,” he said.

He remembers that, as a young child of about 8 or 9 years old, while exploring a pond, he came across an arrowhead.

“For a period of time [after that] I wanted to be an Indian,” Hoge said. “I would organize the neighbor kids my age and we would pretend.”

While in elementary school he recalls he and his classmates participating in “show and tell.” He said some students brought in coins and passed them around. Hoge became more intrigued with these metal bits of history.

“I started getting rolls from banks but never found any Indian Head cents,” Hoge said. “My grandmothers and a great-grandmother gave me coins and my mother was always on the lookout [for coins] and ordered them for me from dealers.”

He said the first coin he ever bought at a coin show was a Fugio copper when he was 10 years old. He paid all of a dollar for this tangible piece of history.

On his 12th birthday, his father surprised him by giving him a coin collection he’d been putting together since before the younger Hoge was born.

In 1976, Hoge said, a friend told him of an opening on staff at the Sanford Museum and Planetarium in Cherokee, Iowa. Hoge obtained a position there. He described those five and half years working as a director as a “great opportunity.”

In 1981 Hoge moved back to Colorado, specifically to Colorado Springs, to become the first professional curator of the American Numismatic Association Money Museum.

“What a fine position and a marvelous opportunity to learn numismatics,” Hoge recalled.

He helped out the ANA authentication service, where he was able to assure one collector that the Pine Tree shilling he found in a vending machine was indeed genuine.

“It was the most concentric and flat piece I’d seen,” Hoge said.

He began teaching at the ANA Summer Seminars, where he enjoyed the interaction with students.

Another special moment, Hoge said, was when he received a telephone call from Doris Bass, the widow of collector and ANA benefactor Harry W. Bass Jr.

“She asked if the ANA wanted Harry’s [gold] collection [for exhibit on long-term loan],” he said, adding that the answer was an excited “yes.”

The 500-plus pieces that constitute the Bass Core Collection, the most complete known collection U.S. gold coins by die variety, is displayed in a vault-like setting in the museum. The exhibit and renovated ANA headquarters opened to the public July 14, 2001.

In June 2001 Hoge announced his resignation from his ANA curatorial position. Hoge said he’d been thinking about making a change. He said he already had twice been offered a position with the ANS during his ANA tenure but had declined. In 2001, he said, he was ready to make the move.

“The day I dropped off my key at my apartment rental office in Colorado, I saw [the planes hit the Twin Towers] on the television in the rental office,” Hoge said. “I thought, ‘What am I getting into?’ ”

When he was able to get a flight to New York City, he found upon arrival that he couldn’t get into his new apartment because of the upheaval in the city.

He said he stayed with friends for the first two weeks. But despite the dramatic start of his next adventure, he said he felt warmly welcomed at the ANS.

In addition to his curatorial duties at the ANS, Hoge was heavily involved with the ANS Coinage of the Americas Conferences as well as being a member of the J. Sanford Saltus Award Committee for outstanding achievement in the art of the medal.

Hoge’s writing prowess is another avenue that has provided a look at his explorations. Not only has he contributed chapters in books, he has written numerous articles for the ANS Magazine as well as a regular column in the magazine, “Current Cabinet Activities.”

One of the most interesting bequests Hoge cataloged for the ANS museum was the Julius Korein Collection of Gobrecht dollars.

In December 2012 Hoge took another step in exploring all that life has to offer, when he married Immaculada “Imma” Socias i Batet.

Hoge said his wife is an art historian and professor at the University of Barcelona in Spain. He said the two met when she was a visiting scholar at the Hispanic Society of America. The Hispanic Society is located on Audubon Terrace in New York City, next door to the former location of ANS headquarters.

Hoge recalls someone at the Hispanic Society referred her to the ANS for information about one of her research projects. He said he “was the person on staff who generally handled referrals for information.”

“She’d been coming to the Hispanic Society for years to do research,” he said.

“We probably crossed paths many times [when the ANS was located next door to the Hispanic Society] and never realized it,” he added.

Hoge said his newest challenge is to learn Catalan, a form of Spanish spoken in the northeastern part of Spain where his wife grew up.

Hoge said he will continue researching and writing about topics of interest to him as well as helping the ANS whenever possible.