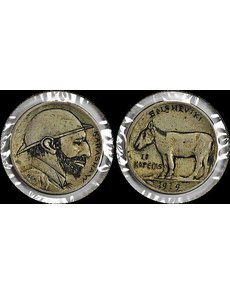 It is likely that this two-design hobo nickel, part of the recently sold Frost Collection, was carved from a 1919 Indian Head 5-cent coin. The Indian Head has been converted to a bearded man wearing a hat, with KARASHAW inscribed to the right, and H.C.A. where the date would normally appear. The reverse has the bison fashioned into a horse or donkey, with the inscribed date of 1919, the denomination 10 KOPECKS and the word BOLSHEVIKI. 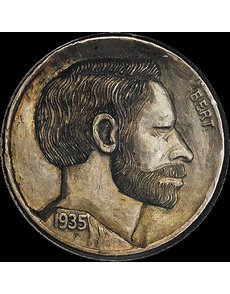 Perhaps one of the finest carved pieces from the Frost Collection is this self-portrait by Bert on the obverse of a 1935 Indian Head 5-cent coin. 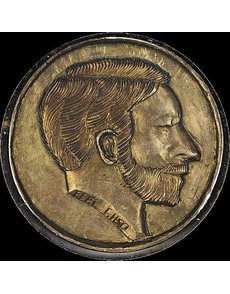 Bo carved a portrait of his mentor, Bert, on the obverse of this 1929 Indian Head 5-cent coin. The truncation carries the carved inscription BERT along with G.H50. 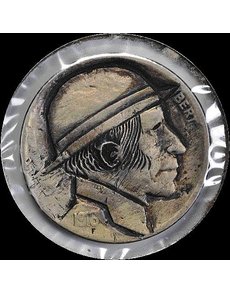 Bert used his carving talents to create this portrait on the obverse of a 1916 Indian Head 5-cent coin. 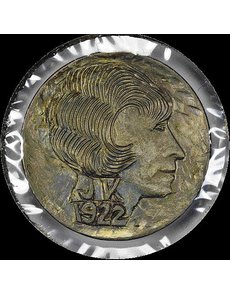 Monique, Bo’s female acquaintance, is the subject of this portrait fashioned from the obverse of an Indian Head 5-cent coin. 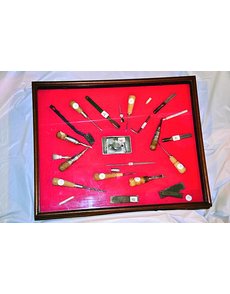 The hobo nickel acquisition also includes an encased collection of contemporary carving and punch tools that may have belonged to either Bert or Bo.

A collection of 218 hobo nickels was purchased May 11 in Denver for $170,000 by Tiburon, Calif., collector Candace DeMarco Kagin.

Nearly a third of the total were carved by premier hobo artists Bertram “Bert” Weigand and his protege, George Washington “Bo” Hughes, who practiced the art form from about 1913 to the mid-20th century.
The private treaty transaction was brokered during the American Numismatic Association National Money Show by H. Robert Campbell, president of All About Coins in Salt Lake City.
Campbell represented the seller of the collection, Larry Frost, of Park City, Utah.
Frost had purchased nearly 60 original hobo nickels from Campbell some 15 years ago that formed the basis of Frost’s collection. Frost continued to add to his collection pieces that Campbell located for him.
Hobo nickels are usually Indian Head 5-cent coins, commonly called “Buffalo nickels,” that are pieces of American folk art, having had their devices reshaped. The artists modifying the coins use a variety of techniques to reshape the metal, including carving or punched with various tools.
The artists transfer the Indian Head obverse, Bison reverse or both sides into a wide range of fanciful and realistic designs.
The Indian Head is often seen converted into another portrait or converted into an image of a woman, by moving around and reshaping metal. For some designs, metal is removed from the coin.
The bison reverse is often seen redesigned into the form of another animal.
Classic hobo nickels represent those pieces created from the early 20th century to the early 1960s. Hobos traveled the country, often precariously clutching the undersides of railroad boxcars to avoid detection by railroad security, in search of work.
The hobo nickels were the extension of that search, with hobos willing to trade the numismatic folk art in exchange for food and lodging when other paying work was unavailable.
The art form is still practiced by artists who create modern versions of the coins.
A top collection
Today, hobo nickels are avidly collected by a group of collector specialists.
Many fellow collectors considered Frost’s collection as among the top collections of original classic hobo nickels both in quantity and quality.
Adding Frost’s 218 pieces to Kagin’s own holdings of more than 300 hobo nickels is likely to render her collection as tops in the numismatic specialty.
Campbell said he had some discussions with Frost about the possibility of dispersing the collection by auction, either through a major numismatic auction firm, or through the Original Hobo Nickel Society sale that has been held each January since 1994 in conjunction with the Florida United Numismatists annual convention.
Campbell said Frost preferred to see his collection remain intact, and efforts were made to meet Frost’s wishes. Campbell was able to achieve that goal when Kagin agreed to the purchase price after other interested parties dropped out of the bidding.
Prominent pieces include four coins engraved by Bert and more than 60 pieces engraved by Bo. Other known classic carvers whose work is featured in the collection are “Peanut Ear,” “Telephone Ear” and “Scruffy Beard.”
Kagin’s new acquisition has more than a dozen each of cameos and two-design hobo nickels plus many pictorial pieces, including coins depicting turtles, dogs, horses, donkeys and elephants.
The hobo nickel acquisition also includes an encased collection of carving and punch tools contemporary to Bo and Bert and that may have belonged to one of the two artists.