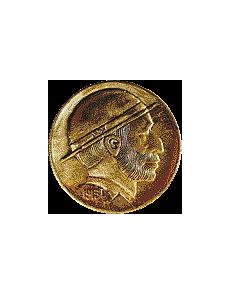 In January, at the Original Hobo Nickel Society’s sale, held at the Florida United Numismatists convention in Orlando, an Indian Head 5-cent piece carved by Bert Weigand sold for $13,750.

In January, at the Original Hobo Nickel Society’s sale, held at the Florida United Numismatists convention in Orlando, an Indian Head 5-cent piece carved by Bert Weigand sold for $12,500 — or $13,750 with the buyer’s fee.

The OHNS — which has 430 members — said that the price represented a new record for a single hobo nickel carving. The auction realized more than $50,000 total across nearly 140 lots including multiple pieces that realized in excess of $1,000.

Bertram “Bert” Weigand and George Washington “Bo” Hughes are the “old masters” of hobo nickel carvers. Bertram, born around 1890, was Bo’s friend and mentor. Both men actively carved from around 1913 — when the Indian Head 5-cent piece was first issued — through the mid-20th century.

Hobo nickels exist at the intersection of folk art and coin collecting. They are modified coins. Typically, Indian Head 5-cent pieces serve as the host coin. Artists transformed the portrait on the obverse through carving, most typically into a bearded man wearing a derby hat.

Sometimes the bison on the reverse is also changed and can take the form of a standing hobo, or a turtle or other creations.

Connoisseurship is key to determining value in the series. Stylistic idiosyncrasies such as a modification of the Native American’s nose, neck, the shape of his hat, ear, or the form of his collar can all help collectors identify, if not who carved it, at least others examples the same artist created. The result is that some artists are known by nicknames celebrating unique characteristics of their carving, such as “No Neck,” “Telephone Ear” and “Peanut Ear.”

A vibrant community of hobo nickel collectors enjoy sharing their collections, and the collector interest helps keep prices for classic issues high. At the same time, their patronage of modern hobo nickel artists helps maintain artistic innovation in the field.

In online auctions and on convention bourse floors, modest efforts defined by basic carving may be found for around $20, while more ornate creations including the work of known modern carvers can range from $200 to $1,000 generally. ¦