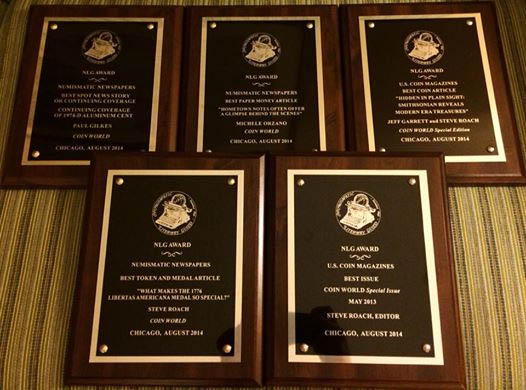 The NLG Bash was conducted in conjunction with the American Numismatic Association World's Fair of Money.

Albanese is a veteran professional numismatist of more than three decades experience. He is a co-founder of Professional Coin Grading Service, founder of Numismatic Guaranty Corp. and co-founder of Certified Acceptance Corp.

"The highest honor of NLG is bestowed annually during the NLG Bash on an NLG member in recognition of writing skill, dedication to numismatics, sense of humor and dedication to the Numismatic Literary Guild," according to the organization. The first recipient of the award was Clement F. Bailey in 1968, for whom the award is named.

Coin World and its staff were honored with five NLG awards.

Paul Gilkes, senior editor, U.S. coins, won the award for Best Spot News Story or Continuing Coverage of Developing Story in Numismatics for his coverage of the 1974-D aluminum cent. Roach won an award for Best Numismatic Newspaper Article on Tokens and Medals for “What Makes the 1776 Libertas Americana Medal So Special?” and Michele Orzano won the corresponding paper money award for “Hometown Notes Often Offer a Glimpse Behind the Scenes.”

The NLG bestowed numerous awards during the convention, as follows:

BOOK OF THE YEAR – The work having the greatest potential impact on numismatics:  Whitman Encyclopedia of Obsolete Paper Money, by Q. David Bowers

Numismatic Investments:  Cash In Your Coins, by Beth Deisher

From Crime to Punishment – Counterfeit and Debased Currencies in Colonial and Pre-Federal America, by Philip J. Mossman

Money of the Bible, 3rd Edition, by Kenneth Bressett

The Dollar of 1804, The U.S. Mint’s Hidden Secret, by Mark Ferguson

BEST ARTICLE OR SERIES OF ARTICLES

BEST ARTICLE OR SERIES OF ARTICLES:

Coins:  “What Better Symbols – The Designing of a Nation’s Coinage” by Edward Colgan, Coin News

BEST ARTICLE, LARGE PUBLICATIONS:  “The Tale of the Thurrock Potins” by Mark Fox, The Numismatist

BEST ARTICLE, SMALL PUBLICATIONS:  “Numisgraphics – The Flesh and the Spirit” by John W. Adams, The Asylum

BEST ARTICLE OR SERIES OF ARTICLES:

Arlene Germano, Entry Coordinator – For long and devoted service to the NLG and entrants in our Writer’s Competition