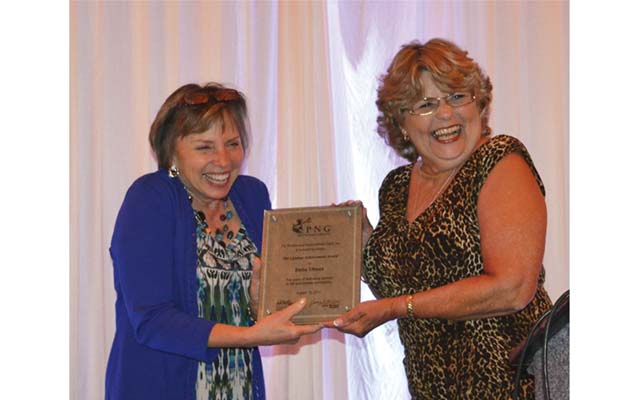 Diane Piret dedicated her adult life to numismatics for four decades. More than half of that time was spent serving the needs of the Industry Council for Tangible Assets, its members and constituents, most recently as industry affairs director.

The Professional Numismatists Guild recognized her in 2013 for those 40 years of service to the hobby with its Significant Contribution Award. The following year, PNG recognized her with its Lifetime Achievement Award.

The American Numismatic Association recognized Piret with its 2014 Elvira Clain-Stefanelli Memorial Award for Achievement in Numismatics, and the National Silver Dollar Roundtable awarded her its 2014 Lifetime Achievement Award.

One was likely to run into Diane Piret at any a major numismatic convention or show across the country. She made her presence known. Her effervescent personality was infectious.

Piret fought for the rights of collectors and dealers on numerous issues affecting the hobby and industry, predominant among them derailing or overturning sales tax legislation. Piret worked tirelessly in this regard.

For the past five years, Piret was also valiantly battling colon cancer as she continued her duties with ICTA.

Piret lost her battle against cancer on April 15. Piret was 67.

Funeral services were scheduled for 2 p.m. Central Time April 21 at Christ Church Cathedral, 2919 Saint Charles Ave., in New Orleans. Calling hours were to begin at 1 p.m. and continue until the time of service. Piret is being cremated, with her remains to be interred in the church's columnbarium.

"Diane was not only a colleague and leader in the rare-coin and precious-metals industry, she also formed decades-long friendships with many," according to a statement released by  ICTA. "Her ability to zero in on the core of an issue or problem and her unerring ability to develop workable, fair solutions were among her formidable talents. For many years, coin dealers knew they could go to Diane with a problem or question and be assured that she would either find the solution or answer or put them in touch with someone who could. Diane was both respected and loved on the bourse floor. Since 1989, she truly was 'the face of ICTA.' "

Born in Staten Island on May 29, 1947, Piret spent the early part of her life in New York City and graduated from Hunter College with a business degree. Piret learned the rare-coin and precious-metals business working at Manfra, Tordella & Brookes, formerly MTB Bank, from the mid-1970s through the mid-1980s. She managed MTB’s retail store at 1 World Trade Center for several years, including during the historic metals markets of 1979 and 1980. She was passionate about her profession and about ICTA, an organization she served for over 25 years.

Piret was hired in the fall of 1989 to be ICTA’s membership director, with the sole responsibility of recruiting members. When she retired in 2015, she was the acknowledged industry expert on cash reporting, broker reporting, the USA PATRIOT Act, and more.

Piret especially enjoyed teaching cash reporting, and she created an annual seminar taught by outside experts to keep coin dealers current on these regulations. Piret was proud of the fact that she and her ICTA colleagues never backed down from a challenge or threat to the industry, and enjoyed telling the story of initiating a meeting with U.S. Treasury officials when the PATRIOT Act was still in draft form after 9/11. Piret met with and formed relationships with officials during that situation that resulted in much more reasonable cash-reporting laws for the industry.

In the mid-1980s Diane and her then-husband were recruited by Jim Blanchard to manage a precious-metals business in southeast Louisiana. Just as Piret had found a professional home in the rare-coin and precious-metals industry, she found a personal home in New Orleans. Piret often noted that she truly was a Southern belle who, through a strange cosmic mix-up, had been born north of the Mason-Dixon Line.

Piret embraced all things New Orleans: the people, the food, the horticulture, the lifestyle, and especially Mardi Gras. For several years, Piret rode horseback for her Krewe of Napoleon and hosted friends and family for the annual festivities, providing many with indelible, magical memories of Mardi Gras in the Big Easy.

A long-time member of Christ Church Cathedral, Piret loved her church and was responsible for building its annual rummage sale into a major fundraiser. It was so successful that her church was able to provide donations to smaller, needier churches in the New Orleans area. Piret loved her neighbors in her community of Belle Terre in Plaquemines Parish, and she invented the “stay-cation” in the tropical oasis she created in her back yard and gardens.