Hobby professionals meet with legislators on 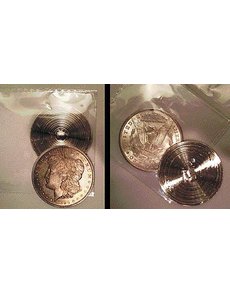 PCGS included in its exhibit counterfeit coins, fake grading inserts and bogus plastic holders. Among the items on view was an example of a counterfeit 1896 Morgan dollar cut in half to be matched with the cut reverse of another coin, to mimic a rarer dollar. The piece was in a counterfeit PCGS slab and caught by one of the grading service’s graders. 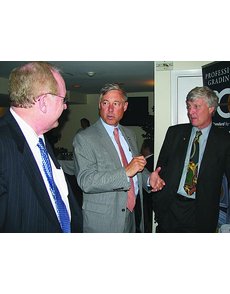 A contingent of hobby professionals met with legislators June 27 in Washington, D.C., to generate support for passage of pending legislation targeting the proliferation of counterfeit U.S. coins made in China and elsewhere and sold in the U.S.

The Collectible Coin Protection Act, if it becomes law, would not only strengthen provisions of the Hobby Protection Act, but also provide increased trademark protection for grading service holders and grading inserts.

The hobby contingent for the congressional awareness events comprised:

? California dealer Barry Stuppler, founder and chairman of the Gold and Silver Political Action Committee (found online at www.goldandsilverpac.com), co-founder and current board member of the Industry Council for Tangible Assets; a member of the board of the Coalition for Equitable Regulation & Taxation; president of the California Coin and Bullion Merchants Association; member of Professional Numismatists Guild Board of Directors.

CERT’s function, according to Ullman, is to do direct lobbying for the rare coin/currency/precious metals industry. CERT is financed by dealers’ 25-cent-per-coin fee for coins graded by NGC and PCGS.

ICTA sets legislative priorities; CERT initiates/implements these priorities; and the Gold & Silver PAC provides the means by which the industry can thank members of Congress who support and promote the industry’s issues and concerns, Ullman said.

All these groups and other industry organizations work closely together to develop and present a unified “coin/precious metals legislative agenda,” she said.

The hobby entourage carried the message to congressional representatives that the proliferation of counterfeit U.S. coins primarily manufactured in China and sold in the United States is on the rise.

Don Willis, president of PCGS, said the rise in the quantity and quality of suspected imported counterfeits sometimes makes it difficult to distinguish fakes from genuine coins.

“Chinese counterfeiting is the most serious challenge faced not only by the collectibles markets and brand name products, but also by the United States Treasury,” Willis said. “Entire industries have sprung up in China to manufacture virtually anything made in America, including U.S. government-issued coins. These factories and industries operate in the open and with the full support of the Chinese government. By its lack of action to stop the activities, the Chinese government endorses the counterfeiting of U.S. coins.

“Even worse,” Willis added, “Customs and the U.S. government do little to stop counterfeits from entering the U.S. Once in the U.S., little effort is made to arrest and prosecute individuals selling counterfeit material. Consequently, the U.S. has been flooded with counterfeit products, including coins, resulting in the loss of billions of dollars in revenue each year.”

Willis said PCGS has detected more than 5,500 counterfeit coins from among its submissions over the past 12 months, higher than any previous 12-month period.

Terri Hewitt, director of sales for Dillon Gage in Texas, addressed the precious metals market and the firm’s market maker status in the industry.

Vartian said provisions of H.R. 5977 would allow litigation against an entity in any venue where the defendant does business. Current law requires the defendant to have an agent in the district in which the suit is filed for the litigation to proceed, he said.

Under H.R. 5977, if a retailer is selling fake coins obtained from a wholesaler, a litigant could pursue the sources, making it unprofitable to do business, Vartian said.

The legislation would also provide greater trademark protection for PCGS, NGC and other grading services whose holders, grading inserts and other security devices have been counterfeited.

Vartian told Coin World that he felt the June 27 contacts with legislators went a long way toward reaching additional congressional sponsors for the legislation.

Stuppler and Vartian are urging collectors and others in the numismatic community to contact their federal representatives in the House asking that they add their names to the list of sponsors for H.R. 5977 in a nonpartisan effort.

Stuppler said he’s optimistic that the necessary congressional support can be generated to secure passage of the legislation.

Hayes said he’s working hard on not only securing passage of H.R. 5977, but helping to direct a parallel effort on the Senate side.

Over the summer months, Hayes said he will be busy trying to replicate on the Senate side the efforts from the House, and bring both sides together in a unified front.