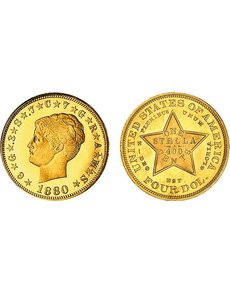 This rare 1880 Coiled Hair $4 gold Stella, like other Stellas, was made privately by Mint officials and secretly sold. They were not published until decades later. Today, an example is valued in the hundreds of thousands of dollars.

Truth can be stranger than fiction, including in numismatics!

As you know if you are an Internet fan, just about every day brings all sorts of unsolicited messages, fillers and the like — ranging from “Darwin Awards” to photograph albums of great beauty.

More than just a few things are fake, created with PhotoShop or another program by people having a lot of time on their hands. Just as we have Chinese counterfeit coins, there are counterfeit websites, as we all know. A perusal of Snopes.com identifies many of these fake websites.

Recently I received a listing of “Did You Know?” facts, or at least supposed facts, including:

? For every extra kilogram carried on a space flight, 530 kilograms of excess fuel is needed at lift-off.

? The letter J does not appear anywhere on the periodic table of the elements.

Ray suggested that “Did You Know” would be “a topic for one of your Coin World columns. Just add a bunch of one-liners.” So, here goes:

Although the United States produced gold coins beginning in 1795, it was not until over a century later in 1900 that America officially went on the gold standard.

The “nickel,” that is, the copper-nickel 5-cent piece, should be called a copper, for it is 75 percent made of that metal.

Beginning in the spring of 1859 the Philadelphia Mint was America’s largest coin dealer, but not officially. The director and officers had a field day making restrikes of the 1804 Draped Bust dollars, Gobrecht dollars, 1856 Flying Eagle cents and other rarities, and creating new pattern pieces. These were sold by Mint officials and their relatives to coin dealers. This sub-rosa activity went on until 1885 and accounts for more than 90 percent of the pattern coins in existence today, including the 1879 and 1880 Coiled Hair and Flowing Hair Stellas.

For every 51 male members of the American Numismatic Association there is just one female member. More next week.