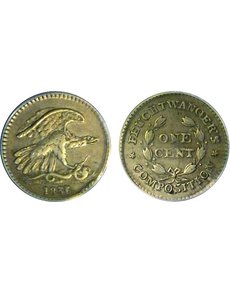 1837 Feuchtwanger cent token was issued during a period with economic similarities to today.

The Feuchtwanger cent is as powerful a symbol today as it was when minted privately in 1837, during the economically depressed, politically volatile Hard Times era (1833 to 1844).

The “cent” is really a token that almost became an official coin. The Mint considered but ultimately rejected its metallic composition of “German silver,” an alloy of copper, nickel, zinc and tin.

His token features an eagle grappling with a snake on the obverse, dated 1837. On the reverse appear the words feuchtwanger’s composition and one cent with a berried wreath beset by two small stars.

The token is so well designed that it could pass for U.S. currency, just as the Liberty Dollar might have when introduced by the National Organization to Repeal the Federal Reserve Act — a Hard Times-sounding name.

Like the Liberty Dollar, the Feuchtwanger token was privately minted and widely circulated. However, the government then had not yet adopted laws against such manufacture.

There are other parallels to our time. The Panic of 1837 caused as much turmoil as the Recession of 2008. States were paying for government land with paper money, causing Andrew Jackson to issue an order accepting only gold and silver as payment — reminiscent of movements today to return to the gold standard.

In 1837, the U.S. Mint was concerned about the cost of the large copper cent whose manufacture exceeded its worth, just as the Mint today is struggling with the cost of our 97.5 percent zinc cent.

About three years ago, I purchased my About Uncirculated example holdered by ANACS, for about $200. Demand for Feuchtwanger tokens is rising, though, and recent AU-55 ones are selling for about $300 on major auction sites. Uncirculated ones can cost several hundreds more. Conversely, you can still find examples in Very Fine 20 for $100.