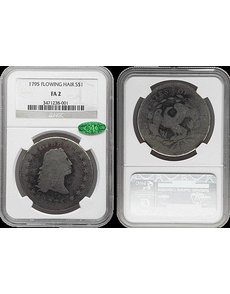 This 1795 Flowing Hair dollar graded Fair 2 with a green sticker that acknowledges that the piece met Certified Acceptance Corp.’s approval realized $1,645 at the recent Heritage auction in Dallas.

While the top 1 percent of the market for early U.S. coins (Nov. 12 Market Analysis) is strong, a healthy demand is seen for quality coins in more modest grades.

The 1796 Draped Bust quarter dollar is a one-year type and has long been coveted by collectors. An example graded About Good 3 by Professional Coin Grading Service featured a bold date and pleasing even gray color. It realized $7,050 in the Heritage sale.

A one-year type coin doesn’t necessarily have to have a date to make it into a problem-free PCGS holder, as evidenced by a 1793 Flowing Hair, Chain cent that was rendered identifiable thanks to a relatively clear reverse. The Fair 2 example in the Heritage auction sold for $2,763.60, which is still a strong price for an example described as “not all that bad.”

One’s mind wanders when seeing these early coins that have endured years of hard circulation. A Fair 2 1795 Flowing Hair dollar was endorsed by Certified Acceptance Corp. and was, perhaps, a textbook example of a coin in this grade. It sold for $1,645, hopefully to a collector happy to purchase a problem-free example of this generally expensive early silver issue for less than $2,000.

If one judged the Flowing Hair dollar by only the first sentence of the description, which stated, “The high points are cream-gray while the open fields have deep lilac toning,” one would undoubtedly expect a coin that graded substantially higher.

Collectors looking for a tough, early Carson City Mint Seated Liberty dollar could find an 1870-CC dollar graded AG-3 by ANACS for $705. The current market is taking a strong liking to Carson City Mint coins and this auction offered five 1870-CC Seated Liberty dollars. It is an unusual opportunity when a collector can purchase this issue for less than $1,000 without having to deal with a coin that has obvious problems.

Collectors of 20th century coins could purchase a PCGS AG-3 Barber quarter dollar with a full Good obverse for $2,232.50. While the reverse showed heavy wear, one imagines that this coin once fit nicely in a Good or better set, assuming that the reverse was concealed by the coin being positioned obverse up in an old blue Whitman folder. ¦