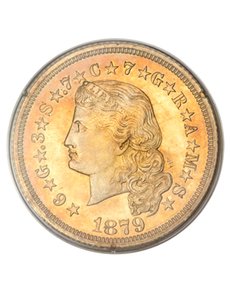 Classic rarities and a few unexpected treasures are among the highlights of the upcoming Heritage Auctions Long Beach Signature U.S. Coin auction, May 31 - June 3.

This auction has a healthy selection of time-tested rarities. There are also a few lesser-known items, unique or nearly so, that could surprise everyone but the winning bidder when they sell.

The proof four dollar gold pieces, or "Stellas," in the auction are the perfect illustration of this mix. There are three of the famous patterns in the auction, two of the familiar Judd-1635 1879 Flowing Hair type in gold. The finer of those two, is graded PR64 by PCGS. Just a few hundred of the gold 1879 Flowing Hair Stellas were made, but that was enough for many collectors to believe they could own one someday. Few U.S. patterns manage to crossover to mainstream collecting, but the gold 1879 Flowing Hair Stella is one of the most prominent — and most expensive.

Less well known but far rarer is a Judd-1636a 1879 Flowing Hair Stella in gilt copper. The design is subtly different from the usual Flowing Hair Stella and pattern experts have confirmed no other examples of this die. It was released from the Mint as a copper piece and gold-plated some time later. The pedigree for this pattern dates all the way back to 1906. Heritage has confirmed only four auction appearances before this offering, and it has already attracted the attention of a noted pattern specialist.

Another popular gold rarity is the 1854-D three dollar gold piece, which combines two quirks of the mid-19th century U.S. Mint: a facility in Dahlonega, Georgia, that only struck gold coins and the slightly surreal "odd denomination" of three dollars. Dahlonega struck the three dollar coins in 1854 only, producing just more than a thousand of them, with fewer than 100 surviving today. Lot 4921, graded AU58 NGC, CAC, comes from a Featured Collection of the auction, The Robert Dorsey Smith Collection.

For sheer novelty, few numismatic items can trump a 10-piece set of hub impressions from the 1883 Hawaiian coinage dies. Struck in bronze and brass around 1900, this unusual — and believed unique — set is graded from MS65 to MS66 by PCGS and mentioned in a prominent reference on Hawaiian coinage. Each uniface hub impression shows one side of one denomination, spanning from dime to dollar and including the eighth-dollar, a denomination never issued for circulation. The coins for the then-independent Kingdom of Hawaii were struck at the Philadelphia Mint, which still holds the dies.

The Stella is not the only popular rarity to appear in multiples this auction. One of the most famous Morgan dollars is the proof-only 1895 issue, long held as the key date of the series. Out of just 880 pieces struck, Heritage is offering three in this auction. The finest of the three is graded PR66 Cameo NGC.

This auction is open for bidding now at www.HA.com/Coins.