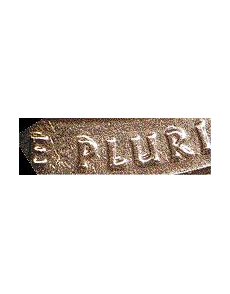 A close-up photo shows the second set of letters on the 2011-D Olympic National Park quarter dollar. These thin, partial letters were produced by a light impact of the hammer (reverse) die after it bounced up and shifted toward the northwest. 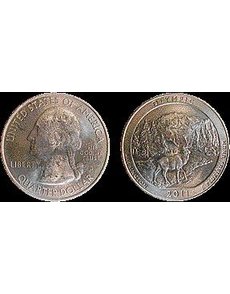 This 2011-D Olympic National Park quarter dollar shows incuse machine doubling affecting the southeast arc of peripheral lettering (E PLUR). The bottom of each affected letter is smeared, and a second set of letters peeks out above the normal letters. 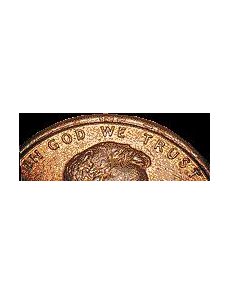 A high bounce and a shift to the north produced a second set of letters along the design rim of this 1994 Lincoln cent. It’s an example of “rim-restricted design duplication,” another form of machine doubling.

In 2010, the U.S. Mint began striking quarter dollars for its America the Beautiful program. Each coin features a reverse design that celebrates a national park or other site of national significance. A raised perimeter ring on the reverse face houses an array of incuse design elements.

The presence of these incuse elements raises the odds of seeing new or unusual effects, even in so humble an error category as machine doubling.

Machine doubling occurs immediately after the hammer die has reached the lowest point of its downstroke. It generally reflects instability in the die, die assembly or the coinage press as a whole.

In some cases, either die can rebound from the surface of the coin, shift laterally and land lightly on the newly struck design elements. This produces marginal shelving at the edge of the design, but can result in clear duplication of interior design details.

In other cases, a die simply shifts laterally after the hammer die reaches its lowest point. This causes smearing of the newly-struck design and the piling up of relocated metal into a series of ridges.

While the same die motions affect both raised and incuse design elements, the resulting appearance is rather different in the latter. This has caused some cases of incuse machine doubling to be mistaken for a doubled die (hub doubling), a mishap that results from multiple impressions of a working hub into a working die. An example of deceptive machine doubling in a 2010 Grand Canyon National park 5-ounce silver bullion coin was recently discussed by Ken Potter (http://numismaster.com/ta/numis/Article.jsp?ad=article&ArticleId=17345).

A commemorative quarter dollar recently found in pocket change by Alex Tuel further illustrates the ease with which incuse machine doubling can be mistaken for other sorts of minting errors and die varieties. The coin in question is a 2011-D Olympic National Park quarter dollar.

Tuel first presented his specimen on the message board of Lincoln Cent Resource (www.lincolncentresource.net/forums/showthread.php?t=17470&page=3). Photographs provided by Tuel showed a second set of overlapping letters (E PLUR) that were offset and independent from their normal counterparts. The extra letters are much thinner than the normal ones.

Early opinions gravitated toward a doubled die or a Type II counterclash. The latter is a form of patterned die damage that results when a hard piece of metal is struck twice (see Collectors’ Clearinghouse, Sept. 29, 2008).

I suspected machine doubling (as did others), but couldn’t be sure just by looking at the photos. So I asked Alex to send me the coin and he generously obliged. An examination under a microscope confirmed my suspicions.

The bottom (outer) portions of the letters E PLURIBUS show conspicuous smearing, a sign of unwanted movement in the reverse (hammer) die or hammer die assembly. The second set of letters was evidently caused by a high bounce of the hammer die after it reached the lowest point of its downstroke.

Remember that the incuse letters on the coin are created by raised letters on the die face that extend well beyond the plane of the surrounding field. In this series, the perimeter ring is recessed on the die face and the letters stick up from its floor. The hammer die’s bounce would have carried those raised letters completely out of the recessed letters they’d just created. A slight shift to the northwest positioned those raised letters directly above the raised perimeter ring of the coin. Descending from the apex of its bounce, the hammer die made light contact with the coin’s perimeter ring. This light impact produced the second set of letters in the field. The reason they’re so thin is that, in cross-section, the apex of each raised letter is narrower than its base, and only the apex left an impression.