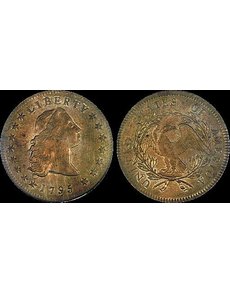 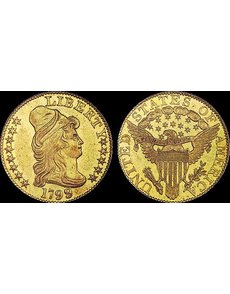 More than 2,200 lots of Colonial coins, United States coins from half cents through gold $20 double eagles and more will be offered in three public sessions July 12 and 13 by Heritage Auctions in conjunction with the summer convention staged by Florida United Numismatists in Orlando.

Among the highlights in the auction are a 1776 Continental Currency dollar, with CURRENCY spelling in the inscription; a 1795 Flowing Hair, Three Leaves silver dollar; an 1854 Indian Head gold dollar; an 1848 Coronet, CAL. gold $2.50 quarter eagle; and a 1799 Capped Bust, Heraldic Eagle, Small Stars gold $5 half eagle.

According to the auction lot description, “Little evidence exists of the history of the Continental Currency coins, although it is certain that they were struck in 1776 as the dates suggests.”

Numismatic researcher Michael Hodder believes the Continental Currency coins were produced in the late summer of 1776 in New York before British capture of the city in September.

“It is thought that these pieces were made to replace the paper dollar, and in fact, the New York paper money issue of August 13, 1776, omitted that denomination,” according to the auction lot description.

The coin is from the most common of the 1795 dollar die marriages. Still, the coin is attractive to type collectors whether or not they pursue subvarieties such as the Two Leaves or Three Leaves coins. The other five known Three Leaves die marriages are all rarer than the BB-27 variety.

Stickered by Certified Acceptance Corp. for being superior within the grade, the PCGS MS-66 1854 Indian Head gold dollar, Lot 4660, represents the beginning of an attempt by Chief Engraver James B. Longacre to rectify problems associated in 1849 with the introduction of the Coronet gold dollar. Among the problems, its small size and light weight resulted in the gold dollar being easily lost.

Not only was the diameter in 1854 increased to 14 millimeters, a 1-millimeter increase, but the thickness was reduced and the motif changed from the Coronet design to the Indian Head design introduced simultaneously on the gold $3 coin.

The 1848 Coronet, CAL. gold $2.50 quarter eagle offered, Lot 4709, is one of 1,389 quarter eagles struck in 1849 at the Philadelphia Mint from 230 ounces of gold shipped from the gold fields during the California Gold Rush. The 1,389 quarter eagles were counterstamped on the reverse in the field above the eagle’s head.

Only 10 to 12 examples of the variety are known, according to Dannreuther, although the cataloger believes fewer pieces actually exist, finding just eight auction records over the past 30 years, including an earlier sale of this example. The coin being offered is the first example of the BD-4 variety to appear in a Heritage auction since the firm began its permanent auction archives in 1993.