Heritage to auction 1792 half disme at Long Beach 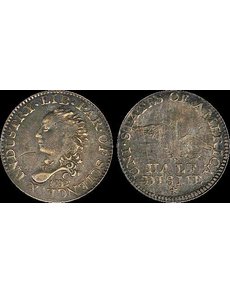 A 1792 half dime, graded VF-25 by PCGS, highlights Heritage Auctions’ Long Beach Sale, scheduled for May 30 to June 3.

The 1792 half disme was struck in the cellar of a Philadelphia saw maker, though produced under Mint authority and under the control of Mint officials, prior to the construction of the Philadelphia Mint facility.

The half disme (the latter word probably pronounced the same as “dime” in its time, although some believe it may have been pronounced as “deem”) is composed of 89.25 percent silver, 10.75 percent copper and having a diameter of 16.5 millimeters/0.65 inch. Adorned with a design by Robert Scot, researchers believe that it was minted at the behest of President George Washington.

Legends surround the coin. One is that the portrait features Martha Washington, though no definitive evidence supporting this assertion has been uncovered. Another is that the silver used to produce the half dismes was derived from silverware provided by President Washington. However, many believe it more likely that the silver used was actually a mix of silver bullion and foreign silver coins.

The purpose of the 1792 half disme has been the subject of much debate, with some believing the coin was merely a pattern and not meant to circulate, as it was distributed by Washington primarily to his friends, family and various dignitaries, while others assert the coin was minted for circulation purposes. Proponents of this theory can point to the very few surviving examples that escaped the rigors of circulation.

The Heritage catalog describes the coin, Lot 3418, Judd 7 (United States Pattern Coins, Experimental & Trial Pieces by J. Hewitt Judd, edited by Q. David Bowers), Pollock 7 (United States Patterns and Related Issues by Andrew W. Pollock III), as follows: “Deep dove-gray toning consistently drapes both sides of this desirable early Federal silver issue. A thin, curved scratch is present from the N in INDUSTRY to the underside of Liberty’s jaw. A significantly lesser thin mark crosses the cheek, and a small dig affects the top of the forehead and causes a slight wave to the piece. Much of the eagle is softly struck, but relatively sharp definition on the tail feathers and the left (facing) wing affirms that the piece has avoided heavy circulation wear. Liberty’s hair near the ear is blunt, although the curls at the top of the head and above the shoulders retain splendid inner detail. The peripheral legends are generally sharp.”

Another coin in the sale of interest to collectors is a 1907 Saint-Gaudens, High Relief, Wire Rim gold $20 double eagle, Lot 5340, graded Mint State 67 ? by Numismatic Guaranty Corp. According to the NGC Census, only three pieces are graded MS-67 ? with only six pieces overall possessing better grades.