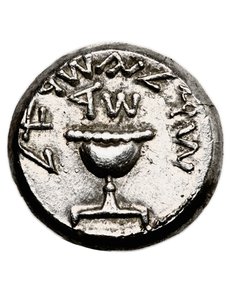 Heritage Auctions is putting the finishing touches on the catalog for Shoshana II, the second half of the incredible Shoshana Collection of Ancient Judaean Coins. Shoshana II will be held on Wednesday, Sept. 5, during the Long Beach Coin & Collectibles show in Long Beach, CA. The Shoshana Collection, assembled over a 30-year period by a Southern California collector, comprises coins related to the founding of Ancient Israel and the story of the Jewish people in the Holy Land. Part 1 of the Shoshana Collection, March 8-9, produced several world records, including $1.1 million for a "prototype" shekel of the Jewish War struck in the first year of conflict, 66 CE, one of two known examples. Two other coins also sold for just under $1 million each and altogether the 712 coins realized $7.6 million.

While there aren’t likely to be any million dollar shekels in Shoshana II, several coins are expected to sell well into five and even six figures and there will be many coins well within the reach of collectors on a more modest budget. As with the first auction, the second catalog is being written and annotated by David Hendin, author of "Guide to Biblical Coins" and the best-known living authority on Judaean coinage.

One highlight is a rare Year 5 shekel, struck during the Siege of Jerusalem by the Roman General Titus from May to September of 70 AD, is perhaps the finest known of 14 surviving "irregular" examples, including one now residing in the British Museum and a second in the Israel Museum. The coin carries an estimate of $75,000.

Nearly 200 Bar Kokhba coins will be included in the second, including five extremely rare silver selas dated Year 1. The Bar Kokhba offering includes a broad array of types and overstrikes with estimates ranging from $200 to more than $25,000, so there should be something to suit any interested collector's pocketbook.

If you'd like to receive a copy of the Shoshana II catalog and are not sure whether you are on Heritage's print mailing list for Ancients, please write Dave Michaels at DMichaels@HA.com or call him at (310) 492-8615.