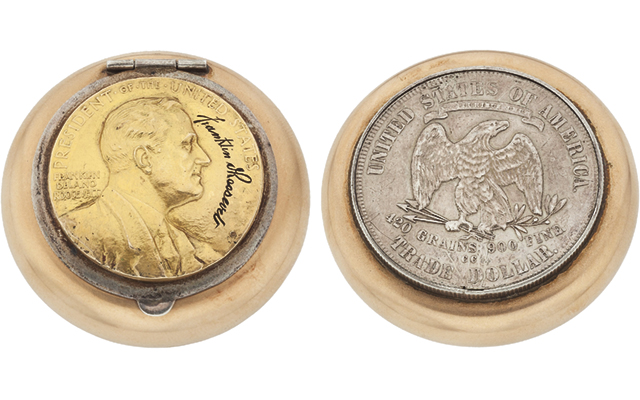 Gold pillbox pedigreed to the estate of Harry S. Truman's only child, Margaret, has on its lid a medal depicting Franklin D. Roosevelt with his engraved signature. An 1876-CC Trade dollar, from the Carson City Mint, forms the bottom of the box. 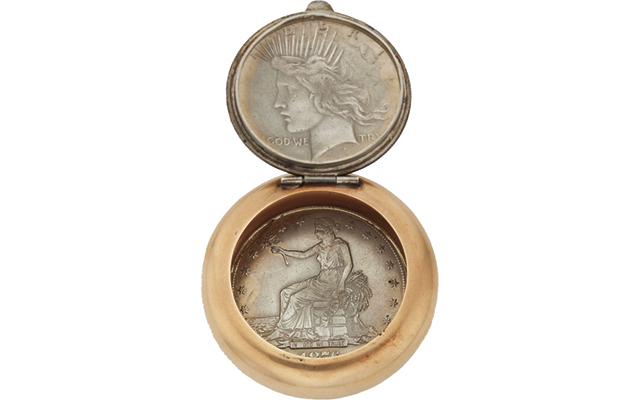 A number of numismatic items pedigreed to the estate of Margaret Truman Daniel – the only child of President Harry S. Truman and his wife, Bess, are being offered in Heritage Auctions’ May 24 Americana & Political Signature Auction in Dallas.

One of the more unusual items offered is a gold pillbox incorporating two silver dollars believed to have been once owned by President Franklin D. Roosevelt that he presented to Truman, his vice president and eventual successor to the presidency.

Measuring 1.75 inches in diameter and 0.75 inch high, the pillbox bears mounted on its lid a gilt brass medallion of Roosevelt, with FDR’s signature engraved in the field and filled in with enamel.

According to the Heritage auction lot description, “When the lid is opened, we see a 1924 silver Peace Dollar on the other side, of convex form. The base of the box contains an 1876-CC (Carson City) silver Trade Dollar, neatly spot welded.”

Among the other items are a 14-karat gold money clip on which is mounted a Coronet gold $10 eagle dated 1884, and a Harry S. Truman 80th birthday gold medallion.

The money clip bears the initials H S T arranged vertically. The eagle is mounted within a retaining ring, hiding a Mint mark if there is one. Heritage describes the coin’s grade as About Uncirculated.

The 14-karat gold, 1.5-inch medal was presented to President Truman on the occasion of his 80th birthday on May 8, 1964. The medal’s obverse features a bust of Truman facing left, inscribed "Happy Birthday Mr. President Harry S. Truman," with two imbedded diamonds flanking the portrait.

“The medal is executed in a lovely matte finish with polished letters,” according to the auction lot description. “The reverse has a raised bezel, an integral part of the medal. Raised loop at the top with gold chain for suspension.”

The sale totals 490 lots, with the first 237 offered at Heritage’s headquarters at 3500 Maple Ave., 17th Floor, in Dallas, and the remaining lots offered May 25 via mail, fax, Internet, and Heritage Live.