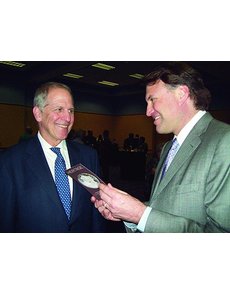 Heritage Auction Galleries announced Jan. 6 it will host a charity auction in January 2012 with the goal of raising more than $1 million to create an endowment fund for the National Numismatic Collection housed in the Smithsonian’s Museum of American History in Washington, D.C.

The NNC, containing more than 1 million numismatic items, ranks as one of the premier numismatic collections in the world and includes some of the United States’ greatest numismatic treasurers.

The endowment will be used to help care for the collection and provide greater access to it for both scholars and the general public. Projects planned in the immediate future include photographing the entire collection and making it available in an online catalog, producing a Web-based numismatic library, and providing additional traveling exhibits with a special emphasis on offering a window into the nation’s history through coinage.

Heritage Auction Galleries President Greg Rohan, at a reception during the Florida United Numismatists Convention in Tampa to launch the year-long effort to secure items for the auction, asserted that the numismatic community is charged with the responsibility to grow the hobby and that “we owe it to the next generations to provide the resources to introduce the next generations to numismatics.”

Rohan noted that despite the common belief that the Smithsonian is totally federally funded, it receives only a portion of its operating funds from the government, and that funding and donations from the private sector are vital to its future.

Anyone may donate collectible coins and paper money for the auction, and Heritage will donate all of its services in conducting the auction. There will be no seller’s fees or buyer’s fees and 100 percent of the proceeds will go directly to the NNC.

Cash donations will also be accepted for those who do not wish to donate items for the auction.

Rohan announced that the first item to be donated for the January 2012 auction is a Proof 66 deep cameo 1895 Morgan dollar that was recently purchased at auction by its anonymous donor for $126,000.

Rohan said Heritage and Smithsonian officials do not expect all donated items to be in the same league as the first coin. “In fact we welcome the coins in the $500 to $1,000 range.”

Donors will also have the option of designating the proceeds of specific lots consigned to other Heritage auctions throughout the year for the NNC endowment fund.

All who donate to the Smithsonian Benefit Auction will receive a charitable gift receipt from the Smithsonian for their tax-deductible contributions. They will also qualify for a range of benefits, established for various levels of donations that begin at $500 and top out at $100,000 (see the Editorial in this issue, Page 14, for details on the various donation and benefits levels).

Dr. Brent Glass, director of the Smithsonian’s Museum of American History, speaking at the reception said public-private partnerships such as the benefit auction are “critical to the future of the Smithsonian.”

Glass observed that the Smithsonian is “in the forever business,” and that during the next year through traveling displays and special exhibits, he and the NNC staff hope to build awareness of the collection and invite the public, especially the numismatic community, to become much more involved in assuring its future.