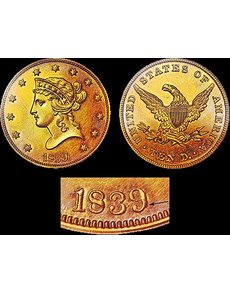 Only three examples are known in Proof of the 1839/8 Coronet gold $10 eagle, one being in the National Numismatic Collection in the Smithsonian Institution’s Museum of American History. The example shown is PCGS Proof 61. Evidence of the underlying 8 is shown at the arrow.Images courtesy of Heritage Auctions.

Three Proof 1839 gold coins, the $2.50 quarter eagle, $5 half eagle and $10 eagle, will be offered as separate lots on Aug. 3 in Philadelphia by Heritage Auctions during its Platinum Night session of U.S. coin rarities.

Proof production of 1839 gold $2.50 quarter eagles, $5 half eagles and $10 eagles was minuscule. Today, nine pieces combined are known. Most of the known pieces were discovered in the late 1970s and early 1980s.

The Proof 1839 Classic Head quarter eagle in the auction, graded Proof 62 by Professional Coin Grading Service, is one of just two examples whose pedigrees can be traced, of four pieces known to Heritage staff.

The coin in the Aug. 3 auction last sold at public auction as part of the Buddy Ebsen Collection in June 1987 by Superior, where it brought $20,900.

Only two specimens of the Proof 1839 Coronet half eagle are traceable. The PCGS Proof 61 example offered was once owned by King Farouk of Egypt, and was sold as part of the Palace Collection in 1954. It last sold at public auction in January 2010 graded NGC Proof 61 for $184,000.

The eagle in the sale last appeared at public auction in May 1993 when sold by Bowers and Merena as part of a three-coin gold Proof set NERCG had acquired 11 years earlier. The coins were first bid upon as individual single lots, then the three bids were totaled and 5 percent added to begin bidding for the coins as a set. The three-coin set sold for $143,000. (The quarter eagle and half eagle in the Platinum Night auction are different coins than were in the intact set sold in 1993.) ¦