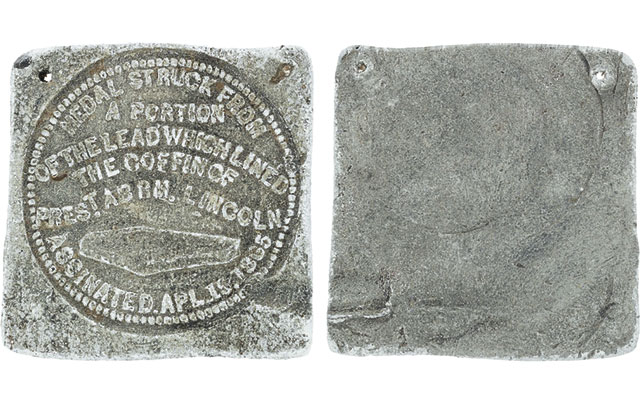 Relic medal was struck from lead cut from the lining of President Abraham Lincoln's coffin.

A uniface relic medal struck from lead clipped from the lining of the coffin holding the body of President Abraham Lincoln is among the lots comprising the Donald P. Dow Collection of Lincolniana being offered Jan. 24 by Heritage Auctions.

On a 1.75 inch square piece of lead is struck an image of the coffin within a beaded circle in which is inscribed MEDAL STRUCK FROM / A PORTION / OF THE LEAD WHICH LINED / THE COFFIN OF / PREST. ABRAM. LINCOLN / ASSASSINATED.APL 15, 1865.

According to the auction lot description, " Lincoln's coffin was moved countless times between 1865 and 1901 while at Oak Ridge Cemetery in Springfield. We believe this relic dates from September 26, 1901 when Lincoln's coffin was exhumed a final time, the lead coffin liner cut away, positive identification made by 23 people, the coffin resealed, placed in a metal cage and covered with cement. We can recall but a single auction appearance (a "Railsplitter" auction) which is likely the source of this item. It was hotly contested at the time."

For more information on the sale, visit the Heritage Auctions' website.