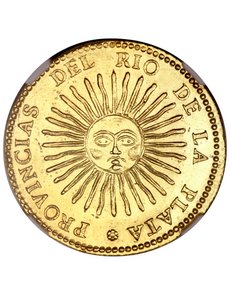 Heritage Auctions is presenting their September Long Beach Signature Auction for World and Ancient Coins, now open for bidding at the Heritage websitewww.HA.com/coins. This official auction of the Long Beach Coin Expo is scheduled for September 6-11 in Long Beach.

The Heritage World and Ancient Coin auction, as has become tradition, features a wonderful selection of Latin American coins from Argentina to Mexico, and from Peru to Brazil. There are three golden "Sunface" 8 Escudos going under the hammer (including an MS63!). Over 250 lots from Brazil are offered, including an amazing group of silver 640 Reis (from the Santana Collection), amongst which are an extremely rare 1816-B specimen and all of the 5 dates struck at the Minas mint including the ultra-rare, one-year type 1818-M. The auction also features a very interesting group of gold coins from South America's largest country including a nearly unique 4000 Reis of 1820 struck at the Bahia mint. Although the selection of Cuban coins consists of just 50 lots or so, it is nothing short of amazing with every 1915 Proof issue, including the 20 Pesos in PF65 Cameo! From Mexico, several pre-1750 8 Escudos are offered from among a total of over 150 lots.

From Europe, the offering of British coins is truly amazing with over 600 lots. Special attention should be paid to one of the most beautiful Henry VIII Sovereigns we have seen. France and Germany are both well represented with 150 and 250 lots respectively. Russia, which continues to move back up in value, has 239 lots with high grade proof issues, Gem gold and platinum, and rare medals.

From the Asian continent, there are over 250 lots from China, which, despite a recent correction in value, continues to be the central area of interest in Asian numismatics. India, which is growing steadily in strength, is represented by nearly 100 lots with some very interesting proof pieces in Gold and Silver.

Finally, from the grand continent of Africa, the auction features a beautiful group of South African coinage including Gem Ponds and better silver issues.

Long Beach will also feature the inaugural Heritage World Paper Money Signature Auction, scheduled for September 6-10, and Part 2 of the Shoshana Collection of Judean Coins, scheduled for September 5. Between these three auctions, there are over 7,500 lots from around the world for your bidding pleasure. Collectors of US coins need not worry — there are also 4,500 lots of US material already scheduled to be offered in the September 5-9 Heritage US Coin auction, with more still coming in.

Heritage will be previewing about 200 highlights from their Long Beach world coin and currency auctions at the upcoming Philadelphia ANA convention. Interested collectors who are attending the convention are invited to come by!

All Heritage Long Beach world coin and currency auctions are open for bidding now at HA.com/Coins and HA.com/Currency.