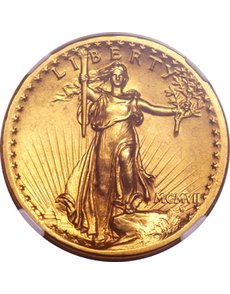 Continuing their annual tradition begun in 1996, Heritage Auctions has awarded a Mint State High Relief double eagle as the Grand Prize in their annual client survey. The classic American numismatic rarity, certified by NGC as MS-60 Flat Rim, was won by Wayne Elworth, a collector from Wyoming, who described his prize as "the best thing that has ever happened to my meager little collection." The surveys are undertaken by the auction firm to support higher levels of service.

According to Mr. Elworth: "I was totally shocked when Bob Korver called to tell me I had won a Mint State High Relief Saint. I could hardly hold on to the phone. It's the only thing I have ever won, and is now the 'crown jewel' of my collection. Thank you, Heritage, so very much — I can't thank you folks enough."

Mr. Elworth's interest in rare coins," explained Heritage Vice-President David Mayfield, "started the summer of 1953 when he found a 1864 2-cent piece that he describes as 'green as a gourd'; none-the-less, he was soon hooked on old coins."

According to Elworth, "Back then, old coins were easy to get. Many Barber coins, Indian cents, and even some well-worn Seated coins were still in circulation. My collection grew and got better through the years. My interests expanded to Civil War tokens, to sets of Lincoln cents, to silver dollars in the old blue Whitman folders. Over the years I bettered my collection, getting more into nice type coins, including gold type."

The 1907 High Relief Double Eagle, dated with the Roman numerals MCMVII, is considered by many collectors as the most beautiful American coin. Even novice collectors quickly become aware of the issue's fascinating history, starting with President Theodore Roosevelt's desire to improve the aesthetic qualities of America's coinage. Roosevelt, appreciating the coins of ancient Greece with their high relief designs and strong artistic traditions, personally selected sculptor Augustus Saint-Gaudens. Roosevelt understood that a nation's coins are among the most enduring records of its arts, and he wanted coins that would reflect American ideals. As collectors quickly learn, production problems (multiple blows were needed for full striking) and stacking problems in banks limited the commercial use of the High Relief design, and only 12,367 were minted. Reduced-relief versions of Saint-Gaudens' basic design, with the date changed to the Arabic numerals "1907", were produced for the remainder of the year. The High Relief rarity is on most collectors' wantlist, and examples are avidly pursued wherever they appear.