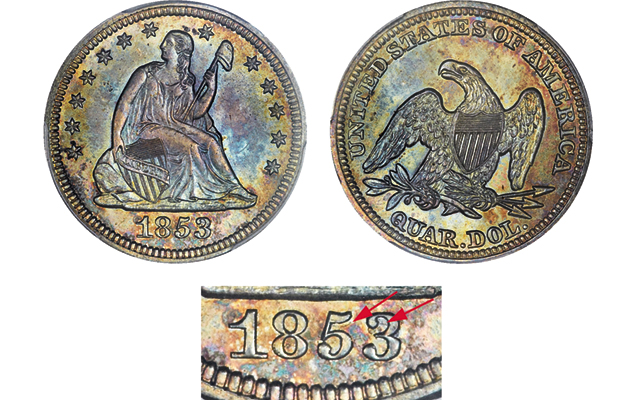 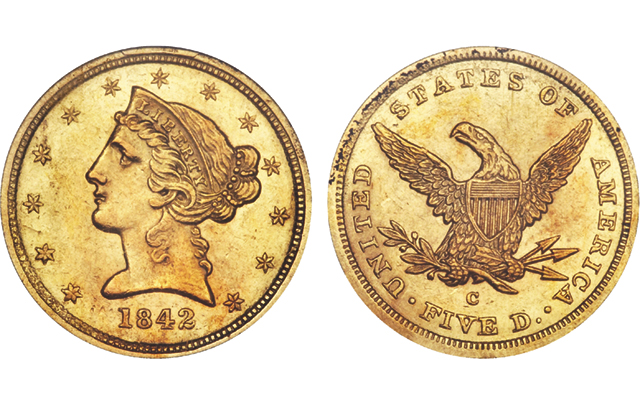 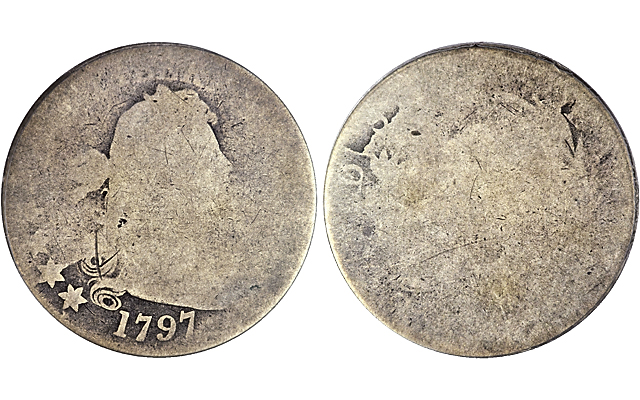 The prices realized include the 17.5 percent buyer’s premium added to the final closing hammer price of each lot won.

The 1853/53 Seated Liberty, No Arrows quarter dollar is the Briggs 1-A variety, as attributed in The Comprehensive Encyclopedia of United States Liberty Seated Quarters by Larry Briggs.

The variety exhibits repunching on the final two digits in the date. The undertype 53 is easily visible to the south of the primary digits as indicated by arrows in the accompanying images.

The variety previously was listed as, according to the Heritage Auctions lot description, as “an overdate 1853 Over 2, but close examination reveals the final digit was definitely struck over a 3. This is the only known die pair for the date that does not feature the Arrows and Rays design, which was introduced later in the year to indicate a weight change.

“Many examples of the 1853 No Arrows type were immediately melted because their intrinsic value was greater than their face value, making the issue fairly elusive today.”

The 1842-C Coronet, Small Date half eagle is considered not only the rarest half eagle struck at the Charlotte Mint, but one of the rarest gold coin releases from the North Carolina production facility.

The half eagle is exceeded in rarity from the Branch Mint production only by the 1849-C Coronet, Open Wreath gold dollar.

“The mintage for the 1842 issue, consisting of both the Small Date (believed to have been struck first, as the logotype is the same size as the previous Charlotte half eagle issue) and Large Date varieties, was just 27,432 coins, and it is estimated only 60 to 80 Small Date survivors are known,” according to the Heritage auction lot description.