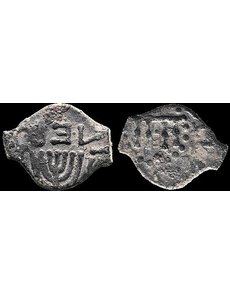 The circa 40 to 37 B.C. bronze prutahs of Mattatayah Antigonus were issued as propaganda in a period when the Maccabean leader was fighting Herod. It is unlikely that any other auction will ever have three examples of the coin, according to expert David Hendin. The piece shown has a pre-sale estimate of $35,000. 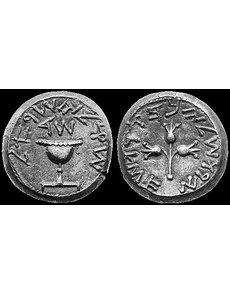 Only a small number of Year Four (April 69 to March 70) silver shekels are known today, an estimated 40 pieces, compared to hundreds of examples from the revolt’s earlier years. The Shoshana Collection features two examples, with this coin exhibiting hoard toning and carrying a pre-auction estimate of $30,000. 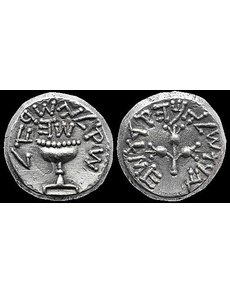 A museum’s Year Five silver shekel was once thought to be unique, but experts have vetted as authentic a hoard of 13 examples rediscovered in a London auction house vault in 1982 after having been condemned as forgeries about a century ago. One of those pieces is in the Shoshana Collection and has an estimate in the auction of $50,000. 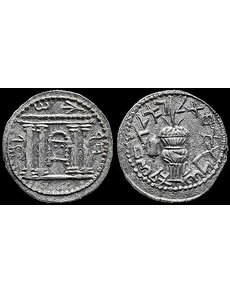 A Year One (A.D. 132 to 133) silver sela dates to the Bar Kohkba Revolt, the third and final rebellion of the Jewish-Roman Wars. In Superb condition, it has a pre-sale estimate of $50,000.

The Sept. 5 auction of the second and final part of the Shoshana Collection of Ancient Judean Coins will finish the dispersal of a collection that an expert once called “one of the most important private ensembles of the coins of the Jews ever gathered.”

The late Leo Mildenberg made that statement, writing in the foreword to The Numismatic Legacy of the Jews by Claudia Samuels and Ya’ akov Meshorer, which featured 228 coins from the Shoshana Collection.

The Heritage Auctions sale doesn’t offer the great rarities of the first auction (which had three coins sell in total for more than $3 million), but it does feature a wide range of historical issues, and its strength is its depth, according to cataloger David Hendin.

The collection of about 1,300 coins, which was built over 40 years by a West Coast collector who remains anonymous, “is without question the greatest collection of Holy Land coins ever brought to public auction,” according to Cristiano Bierrenbach, executive vice president of Heritage, and David S. Michaels, director of ancient coins for the firm.

The first part of the collection realized $7,639,365. “While the commercial value of part II may not match that of Shoshana I, historically it is no less important,” write Bierrenbach and Michaels in the second auction catalog.

Several highlights reflect the broad nature of the offerings in the second part, according to Hendin.

One such area is the trio of circa 40 to 37 B.C. “Showbread/Menorah” bronze prutahs in the auction; the coins are of Mattatayah Antigonus, the last of the Maccabean kings. According to Hendin, it is unlikely that any auction will ever feature three of the coins again.

All of the coins of the type feature on one side the golden seven-branched menorah that stood in the Jerusalem Temple, and, on the coins’ other side, the showbread table in the temple. The coin “must have been designed out of desperation, to show the people why Antigonus was fighting,” Hendin writes in his book Guide to Biblical Coins (Antigonus was warring with Herod).

The first of the triumvirate, Lot 20055, claims a lineage to the Abraham Bromberg Collection — another prominent assemblage of Jewish coinage, which was sold in 1991.

Like all of the coins of this type, the design is incomplete on the coin in Lot 20055, since the planchets were struck with dies intended for larger blanks. This example of the three coins offered in the auction, in About Extremely Fine condition, has an estimate of $35,000.

One of the signal events in Jewish history is the Jewish War of A.D. 66 to 70. When the Jewish Revolt against the Romans broke out in A.D. 66 in Judea, Jewish fighters took control of Jerusalem, and the temple treasure became available. The silver (presumably the Tyrian coins that had been paid to meet tax obligations over the years) was used to strike shekel, half shekel and quarter shekel coins, and thus this coinage is viewed as the first act of independence.

A Year Four (April 69 to March 70) silver shekel is one of three notable highlights from the war in the auction.

“Production of silver coins at the Jerusalem Temple appears to have dropped sharply in the fourth year, when the Jewish War against Rome entered its terminal phase and supplies of precious metal dried up,” Hendin writes in the lot listing.

While hundreds of examples are recorded from the first three years of the revolt, only 40 shekels are known from Year 4. The Shoshana Collection held three pieces, which are among the finest surviving examples; two examples are offered in the second auction (the other was in the first auction).

The standard design features on the obverse a ritual chalice with pearled rim; on the reverse is a staff with three pomegranate buds.

The other Year 4 silver shekel, Lot 20124, is in Extremely Fine condition and has the same estimate.

Lot 20128 is an irregular silver shekel, a representative example of a small number of coins all struck from a single pair of dies, according to the catalog.

The piece in the Shoshana Collection is perhaps the best example of the type, according to Heritage.

In the mid-1980s, 13 Year 5 shekels were found in the vault of London coin dealer Baldwin’s. All heavily cleaned, they had been declared forgeries around the turn of the 20th century. “However, the dies matched the previously-thought-to-be unique specimen in the British Museum collection, which had been acquired by the [British Museum] in 1887,” Hendin writes in the catalog.

That museum piece had strong evidence of burial, and that, coupled with the circumstances of its acquisition “seems to establish its authenticity,” Hendin writes, and also makes it unlikely that the British Museum coin could have been used in the manufacture of false dies from which to create the 13 coins from Baldwin’s.

Scanning electron microscopic studies of the entire group further established their authenticity, and optical microscopic examination of the coins revealed specific manufacturing attributes that would not have been known to forgers active in the 19th century, when the coins were discovered.

In Superb condition, the example in the Shoshana Collection has an estimate of $50,000.

The Bar Kokhba Revolt (A.D. 132 to 135) against the Roman Empire was the third major rebellion by the Jews of Judaea, and the last of the Jewish-Roman Wars.

The facade of the Jerusalem Temple, with the Ark of the Covenant in the center of the entrance, appears on the obverse. The reverse shows a lulav (closed frond of a date palm) and etrog (yellow citron used in a ritual).

Hendin calls the piece offered in Shoshana Collection auction “a simply magnificent specimen.” In Superb condition, it has an estimate of $50,000.

A 19.5 percent buyer’s fee will be applied to all winning bids.