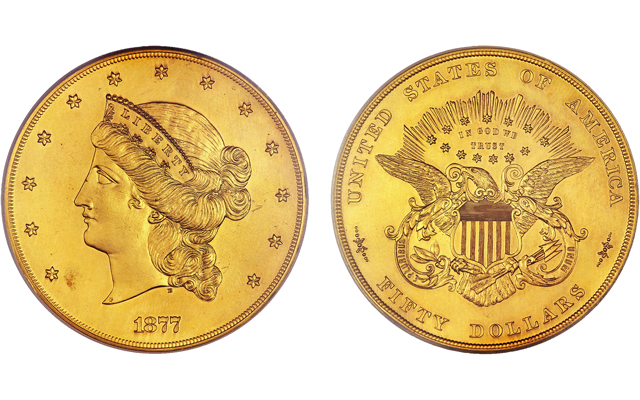 It is not known whether the gilt on this copper 1877 half union $50 pattern was executed at the Mint or sometime later. This PCGS Scure Proof 63 exampled sold for $176,250.

While some other U.S. patterns were struck earlier in off-site facilities, the Silver Center cent is considered to be the first coin series struck within the confines of the newly established U.S. Mint in 1792. The cent pattern derives its name from its method of manufacture.

To create a less bulky coin yet one with intrinsic metal value of one cent, copper planchets were fashioned with a hole in the center, into which a silver plug was inserted. The conjoined planchet was then placed between coinage dies and struck. Had the concept been adopted, cent coins would have been smaller than the first pure copper cents were when actually struck for circulation in 1793.

This quarter dollar is from a one-year type, with 6,146 coins reported to have been struck at the U.S. Mint in Philadelphia. The coin sold is the Browning 2 variety as cataloged in Early Quarter Dollars of the United States Mint 1796-1838 by Rory R. Rea, Glenn Peterson, Bradley S. Karoleff, and John J. Kovach Jr.

The 1796 quarter dollars feature the Draped Bust obverse modeled from the work of Gilbert Stuart, and the Small Eagle reverse that would soon be replaced with a Heraldic Eagle design.

The just-sold Judd 1549a coin was gilt, but according to the Heritage auction lot description, “it is not clear if this was done at the Mint or later.”

Complete prices realized from the sale can be found online.