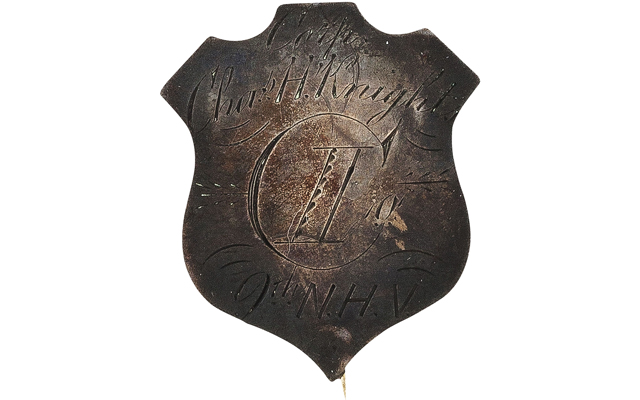 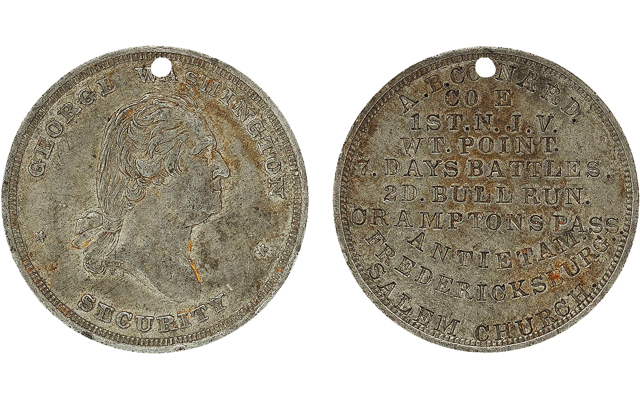 August Conrad, whose identification appears on the reverse of this Civil War dog tag, was a Union soldier in Company E of the 1st New Jersey Volunteers. 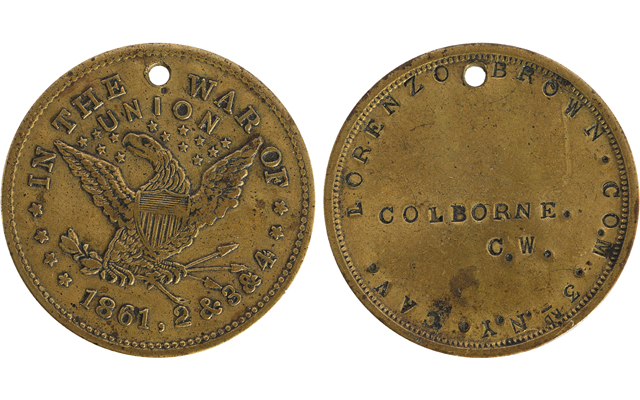 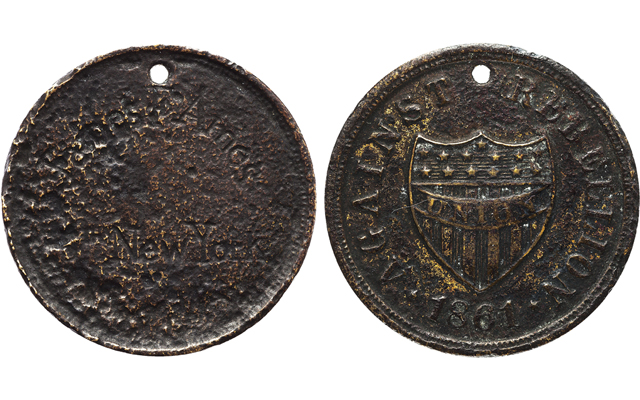 Knight enlisted in the Union Army on Aug. 8, 1862, in Keene, N.H., as a private and was mustered into Company I of the 9th New Hampshire Infantry. Knight was eventually elevated in rank to corporal.

Knight was wounded at the Battle of Petersburg in Virginia on July 30, 1864. Knight was awarded the Medal of Honor, on July 27, 1896, for his valor at Petersburg. The Medal of Honor citation, according to the U.S. Army, reads " In company with a sergeant, was the first to enter the exploded mine; was wounded but took several prisoners to the Federal lines."

Among the other Civil War collectibles offered in Heritage's two-day sale are:

??A 30-millimeter pewter Civil War dog tag for August Conrad (misspelled "Conard" on the tag), a member of Company E of the 1st New Jersey Volunteers. Conrad joined the regiment on May 23, 1861, and was discharged June 23, 1864. The 1st New Jersey Volunteers experienced numerous battles with Confederate troops during his tenured service. The unit lost 153 killed and mortally wounded. The tag's obverse has a portrait identified as George Washington, with SECURITY below. The reverse bears Conrad's military service with each letter of the inscriptions individually punched incuse.

?A 30-millimeter brass patriotic identification disk for Pvt. Lorenzo Brown of Company M, 3rd New York Cavalry. Brown enlisted as a private on Aug. 6, 1862, in Brockport, N.Y., and mustered out on June 7, 1865, in Norfolk, Va. The reverse bears a raised, spread-winged eagle with shield on breast and inscribed above IN THE WAR OF UNION, and below, 1861, 2 & 3 & 4.

??A 30-millimeter brass dog tag belonging to James F. Ames of the 5th New York Cavalry. Ames enlisted as a corporal on Oct. 29, 1861, and mustered into Company M two days later. Ames deserted Feb. 2, 1863, allegedly because of his opposition to Abraham Lincoln's Emancipation Proclamation. Ames ended up joining Confederate troops under the command of Col. John S. Mosby, nicknamed the "Gray Ghost." Mosby commanded the the 43rd Battalion, 1st Virginia Cavalry, known as Mosby's Rangers or Mosby's Raiders. Ames was killed Oct. 9, 1864, by a Union soldier in front of "Yew Hill" near Delaplane, Va. Another of Mosby's men shot and killed Ames' assailant, who was engaged in going through Ames' pockets. Ames' dog tag was dug up in the early 1960s by a Frederick County, Md., collector, according to the Heritage auction lot description. The obverse of the tag features a Federal shield and the inscription AGAINST REBELLION 1861. The reverse is inscribed with Ames' identification information.