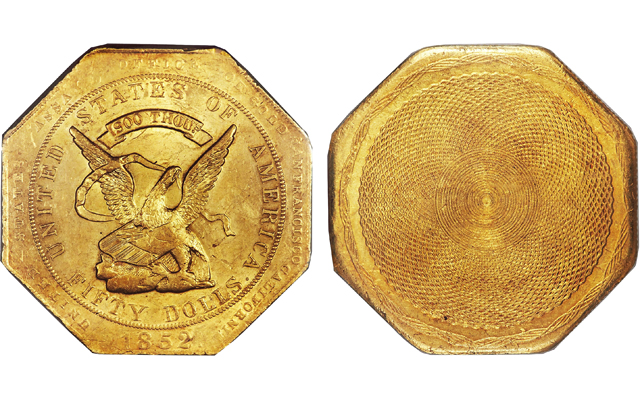 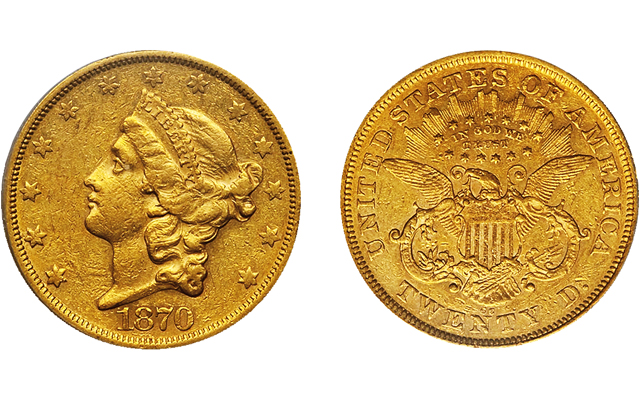 The leading piece was graded Mint State 64 by Professional Coin Grading Service and carried a green Certified Acceptance sticker indicating quality within the grade. It also carried a long and rich ownership history, including Captain Andrew C. Zabriskie, who Heritage notes was probably the biggest collector of pioneer and territorial gold in the early 20th century. The piece made its first auction appearance in Henry Chapman’s sale of Zabriskie’s collection on June 3 and 4, 1909, where it brought $220. It last sold at public auction in a 1993 Superior Galleries auction where it realized $50,000.

The lot description added, “This coin combines the highest available technical quality and eye appeal with unmatched historic interest and an illustrious pedigree. There is simply no comparable example for the finest collection of Territorial gold,” and it realized $396,562.50.

The offering marked the coin’s first appearance at auction in nearly three decades and it is from a low mintage of just 3,789 pieces, of which, Heritage notes, just 35 to 45 examples are thought to still exist (although some estimates place the total survivors as high as 65). In the condition census detailed in the catalog, the top piece is a Numismatic Guaranty Corp. AU-58 coin that was stolen during a Brink’s transport Oct. 19, 2011, and remains missing. A different PCGS AU-50 example also brought $305,500 when offered at Heritage’s Central States Numismatic Society auction earlier this year.