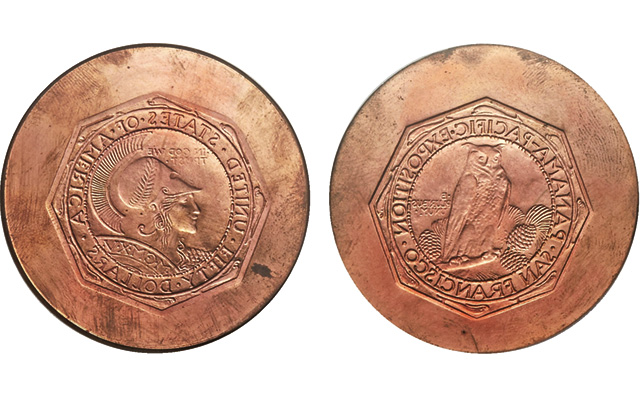 Closing out the sale is a small group of extremely rare commemorative pattern coins including a copper 1915 “No S” Panama-Pacific International Exposition half dollar in Proof 66 red and brown. It is one of only three examples traced and is Judd 1962 in J. Hewitt Judd’s standard reference on patterns.

These were struck before the San Francisco Mint mark was added to the dies, and it is unclear whether these coins were struck as die trials, or if they are fantasy pieces, as two examples also exist in gold.

Few items are as impressive as an octagonal 1915 Panama-Pacific International Exposition $50 hub trial, graded Proof 65 red and numbered Judd A1915-3. It is a trial of the dies on an oversized copper planchet and was likely in the famed collection of Virgil Brand. It has appeared just one time at auction, in 1964.

The image appears in reverse, and as Heritage explains, “The impression was taken from the hubs used to impress the die and not the die itself. Thus, this piece shows the mirror image of the devices that actually appear on the coins.”

The lot description shares the history of two pieces, writing that commemorative specialist Anthony Swiatek purchased these two coins, and many other commemorative patterns in his collection, from Sol Kaplan at a coin show in Shaker Heights, Ohio, in 1971, and they have been off the market since that time.

Also included is a 1915 Panama-Pacific gold dollar reverse die trial, Judd A1915-2, in bronzed white medal, that was first offered at the 1952 American Numismatic Association convention auction and was later offered in a 1974 Bowers and Ruddy auction before being purchased by Swiatek.