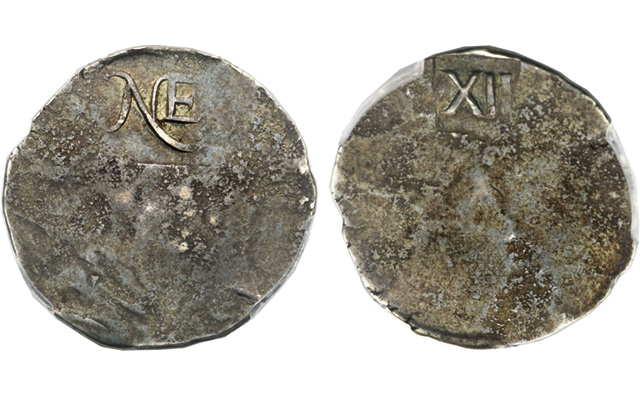 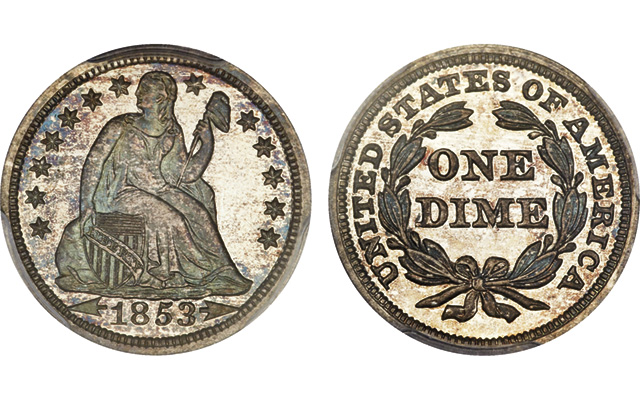 The 1853 Seated Liberty, With Arrows dime is graded PCGS Proof 66+ and stickered by Certified Acceptance Corp. 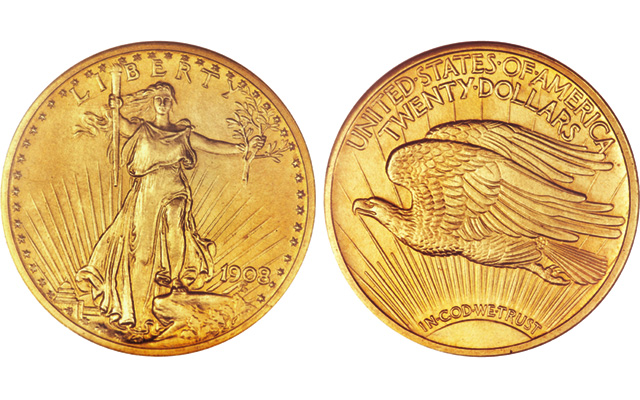 The 1908 Saint-Gaudens gold $20 double eagle is graded Proof 65 by Numismatic Guaranty Corp. and identified with a Satin Finish referred to as a “Roman Gold” Proof issue.

A New England shilling, Proof 1853 Seated Liberty, With Arrows dime and a Satin Finish Proof 1908 Saint-Gaudens, With Motto gold $20 double eagle are among the highlights offered in Heritage Auctions' Dec. 4, 5 and 7 sale.

The four auction sessions Dec. 4 and 5, comprising 2,009 lots of United States coins, will be held at the George R. Brown Convention Center in Houston in conjunction with The Houston Money Show.

Another 1,628 lots will be offered Dec. 7 by Heritage Live!, Internet, mail and fax bidding only.

Graded Professional Coin Grading Service Secure About Uncirculated 55, the Salmon 1-B variety of 1652 New England shilling is pedigreed to having once been part of the Eric P. Newman Numismatic Education Society Collection.

The obverse bears the NE stamp for “New England,” with the denomination, XII, for twelvepence or one shilling, stamped on the reverse. The NE and XII were punched by hand into imperfectly round silver planchets.

The punches were offset from obverse to reverse so that they would not crush each other, according to PCGSCoinFacts.com.

According to PCGSCoinFacts.com, Boston minters John Hull and Robert Saunderson began making the first silver coins ever struck on U.S. soil in in the year 1652.

Considered to be the finest from among a handful of examples known, the 1853 Seated Liberty, With Arrows dime is graded PCGS Proof 66+ and given a green sticker by Certified Acceptance Corp. for quality within the grade.

According to the lot descriptions, just five examples of the With Arrows subtype are reported to have been struck in Proof, and only two of the No Arrows subtype.

There is some debate among numismatists whether, according to the auction lot description, “the 1853 Proofs are unintentional or ‘accidental’ pieces struck from dies that were resurfaced and polished to remove clash marks.”

The 1908 Saint-Gaudens, With Motto gold $20 double eagle is graded Proof 65 by Numismatic Guaranty Corp. and identified with a Satin Finish referred to as a “Roman Gold” Proof issue.

“One would think that this piece was struck late in the year as a prototype for the ‘Roman Gold’ finish used in 1909 and 1910,” according to the auction lot description. “However, research done by the staff at Sotheby’s in 1997 indicates that this piece was actually presented to the Boston Museum of Fine Arts by William Sturgis Bigelow on June 11, 1908.

“The museum’s catalog card for the coin states: ‘One of the first coins struck after this legend was restored.’ This information was supplied to the museum by Frank Leach, Mint Director at the time of the coin’s striking.”

This piece first appeared at public auction by Stack’s at the 1976 American Numismatic Association sale after the coin was deaccessioned by the Boston Museum of Fine Arts.