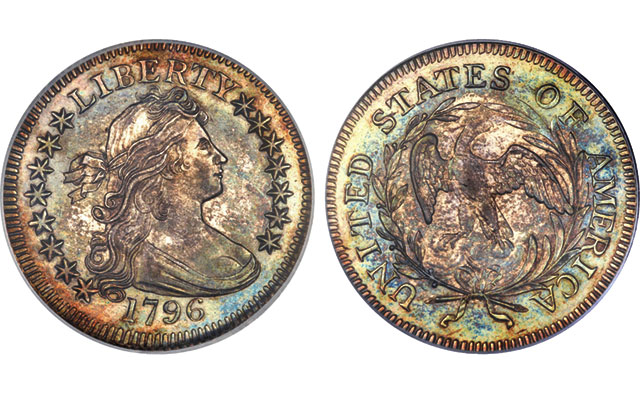 The 1796 Draped Bust, Small Eagle quarter dollar is a one-year type coin for which 6,146 coins were produced from two obverse dies and one reverse die. The PCGS MS-64 B-2 variety illustrated sold for $164,500. 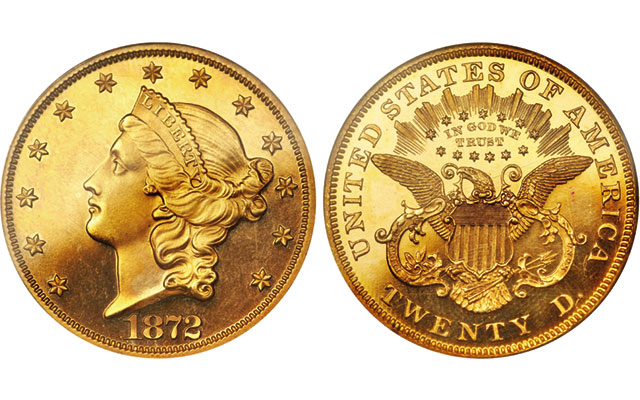 The sale at the Millennium Broadway Hotel was staged in conjunction with the Professional Numismatists Guild New York Invitational show.

The sale included floor sessions as well as lots for which bidding was limited to Heritage Live!, internet, fax and mail bids.

Among the highlights of the auction were two Mint State 1796 Draped Bust quarter dollars — one graded MS-64 by Professional Coin Grading Service, which brought $164,500, and the other graded PCGS MS-63, yielding $152,750.

The prices realized include the 17.5 percent buyer’s fee add to the final hammer price of each lot won.

The 1796 Draped Bust, Small Eagle quarter dollar is a one-year type coin. Both examples offered and sold by Heritage are of the B-2 variety as cataloged in Early Quarter Dollars of the United States Mint 1796-1838  by Rory Rea, Glenn Peterson, Bradley S. Karoleff and John J. Kovach Jr.

The two quarter dollars were among 6,146 struck at the Philadelphia Mint with two varieties recognized as having been struck from the pairings of two obverse dies and one reverse die.

On the two B-2 quarter dollars sold by Heritage, the 6 in the date is high and nearly touches the bust.

On the B-1 variety, the 6 in the date is low and evenly spaced between the bust and the dentils.

Double eagles were struck at the Carson City Mint in Nevada between its opening in 1870 to its ceasing of coinage production in 1893.

The 1870-CC Coronet double eagle has the lowest reported mintage with just 3,789 examples struck. Most of the production was distributed through local circulation.

The Philadelphia Mint is reported to have produced 30 examples of the 1872 Coronet double eagle in Proof quality.

All of the examples struck were for inclusion in complete sets of Proof gold coins.

From the reported production, eight to 12 examples are believed to have survived, with one each of the total in the National Numismatic Collection at the Smithsonian Institution and the American Numismatic Society. The remaining examples are in private collections.

For more information on the auction, visit the Heritage Auction website.