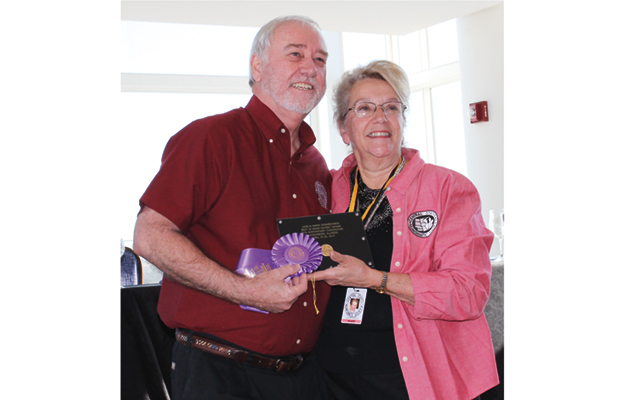 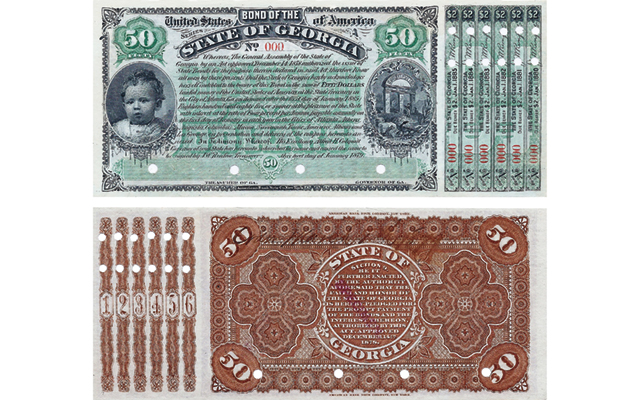 Unissued, Jan. 1, 1879, $50 Georgia Baby Bond bearing test serial number 000 with 4 percent coupons payable at $2 annually to bearer until date of maturity. Shown is one of the Baby Bonds that was part of Mack Martin’s CSNS Best in Show exhibit. 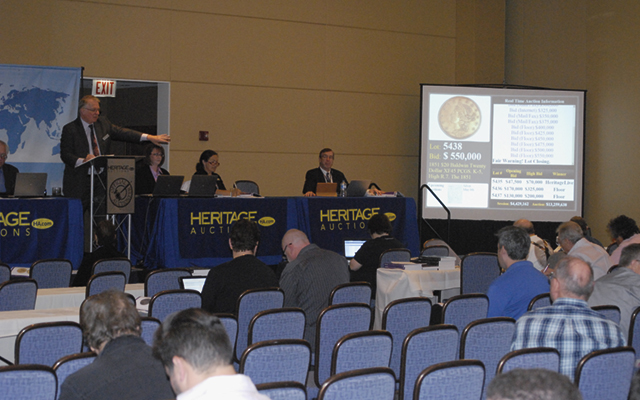 More than $50 million in auctions and an extensive presentation of numismatic exhibits featured prominently during the Central States Numismatic Society 75th Anniversary Convention April 23 to 26 in Schaumburg, Ill.

According to an April 30 Heritage press release, the U.S. Coin auction at CSNS realized more than $46.7 million, its U.S. Currency stood at over $4.1 million, and the World Currency auctions totaled $2.7 million, bringing the CSNS total to more than $53.6 million.

The sale featured the Riverboat Collection — 62 pioneer gold coins and one gold pattern — all of which sold, for a total of $10,489,762. (See related auction coverage on Page 1.)

Foley said dealers have already bought and paid for 60 percent of the dealer booths for the 2015 CSNS convention.

The CSNS convention for 2015, 2016, and 2017 will also be held at the Renaissance Schaumburg Convention Center as was the 2014 show. Foley said a contract is currently being negotiated to include the 2018 convention.

Martin, who has been assembling the collection for 40 years, says it is the only complete collection of Baby Bonds known.

The multicase exhibit features small bonds with denominations of $5, $10, $20 and $50, issued or supposed to be issued by the states of Georgia and Louisiana during the post-Civil War period known as Reconstruction.

The bonds feature portraits of infants or toddlers. Baby Bonds from Georgia are the rarer of the two states, with some issues known by only a single example.

The John Jay Pittman Award for Most Educational Exhibit was presented to Gavin Burseth for “Celebrating A Century of Honor — Boy Scout Medallions, Coins and Tokens.”

The Joseph and Morton Stack Award for the Best Exhibit By A First-Time C.S.N.S. Exhibitor was presented to Mitch Ernst for “The Sower — Symbol of Hope and Hard Work.” The exhibit consists of art medals that portray the sower.

Tony Cass received the People’s Choice Award for “The World’s Columbian Exposition — The Chicago World’s Fair 1893.” The award was presented in memory of numismatic literature dealer John Burns from Pennsylvania, who passed away unexpectedly in January while attending the Florida United Numismatists convention in Orlando.

According to Fran Lockwood, who completed her 17th and final year as exhibit chairperson for CSNS, 51 exhibitors participated from 16 states. Of the 51, 11 were first-time exhibitors at a CSNS convention.